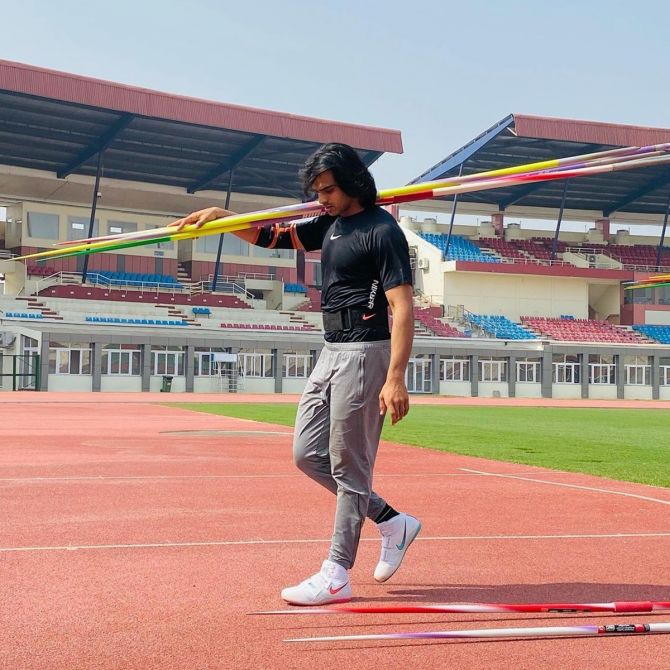 Olympic-bound star Indian javelin thrower Neeraj Chopra has reached Portugal to take part in an event in Lisbon on June 10, which will mark his return to international competition after more than a year.

Chopra, who has not taken part in any international event after qualifying for the Tokyo Olympics in January last year in South Africa, reached Lisbon on Sunday. He will compete at the Meeting Cidade de Lisboa (Meeting, City of Lisbon) on June 10 at Lisbon University Stadium.

"Chopra will take part in a competition in Lisbon on June 10. We are trying for other events also, including the Karlstad Grand Prix in Sweden on June 22," a source close to Chopra said on Monday.

"In Lisbon, he will be able to train as well as take part in competition. That is the most important thing as many countries have stipulated hard quarantine for arriving Indians."

"After relentless efforts from @TheJSWGroup Delhi office - countless follow ups through @KirenRijiju office and MEA @jswsports is happy to share that both @Neeraj_chopra1 and @BajrangPunia have arrived in Portugal and Russia respectively to further their training," he tweeted.

"I appreciate the relentless efforts of @TheJSWGroup  in supporting our elite athletes through @jswsports and involvement of @ParthJindal11 at personal level too.

"This kind of support from our corporate sector will help India emerge as a great sporting nation."

Chopra had spoken about lack of competition hampering his Olympic build-up during an interaction a few weeks ago.

The 23-year-old was to leave for Europe on Monday last for a training-cum-competition stint but it was delayed by a few days due to visa related issues.

Chopra had broken his own national record with a throw of 88.07m in Patiala in the Indian Grand Prix 3 in March.

He had qualified for the Olympics with a throw of 87.86m, which bettered the qualifying mark of 85m, at an event at Potchefstroom, South Africa, in January last year.

After that, he had a brief training stint in Turkey before rushing back home in March last year just before the lockdown due to the COVID-19 pandemic.