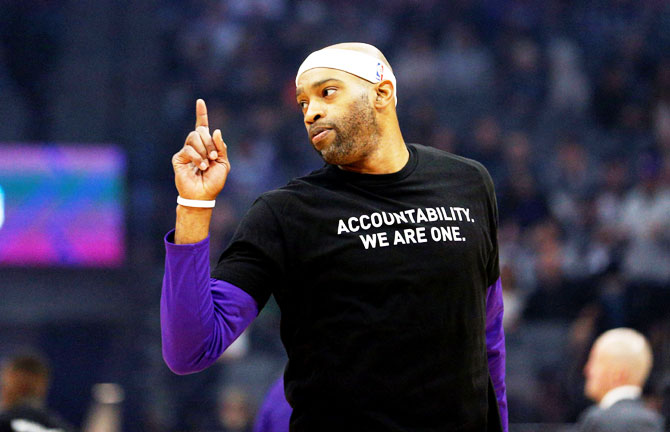 IMAGE: Sacramento Kings' forward Vince Carter (15) stands on the court before the start of the game against the Boston Celtics at Golden 1 Center. Players from both teams wore t-shirts during warmups in honor of Stephon Clark, a Sacramento native who was recently shot and killed by Sacramento police. Photograph: Cary Edmondson-USA TODAY Sports

Sacramento Kings and Boston Celtics players, in a protest backed by the National Basketball Association, took to the court on Sunday wearing warm-up T-shirts emblazoned with the name of the unarmed black man slain last week by Sacramento police.

The squads of both teams took part in the pre-game show of support for civil rights activists denouncing last Sunday's shooting death of Stephon Clark and the killing of numerous other African-Americans at the hands of law enforcement in recent years.

Seventeen players from the two teams also appeared in a public service message that was played on the giant jumbotron TV screen inside the Kings' home arena at Golden 1 Center during a time-out in their matchup on Sunday.

The 30-second spot, which carried the slogan "Accountability. We Are One," was greeted by cheers from among the thousands of fans attending the game, Kings spokesman Chris Clark said.

The same slogan appeared in white letters on the front of the black-T shirts players wore during their warm-up exercises, with the social media hashtag "#StephonClark" on the back.

The on-court display, which the NBA announced on its official website under the headline: "Kings, Celtics Unite for Change," came three days after a Black Lives Matter protest of the Clark killing disrupted the Kings' previous home game against the Atlanta Hawks.

Clark was killed when two police officers investigating a report of vandalism shot him 20 times in the backyard of his grandparents' home in Sacramento last Sunday night. Police video footage of the confrontation released three days later showed Clark holding a cell phone that police said the officers had mistaken for a firearm. 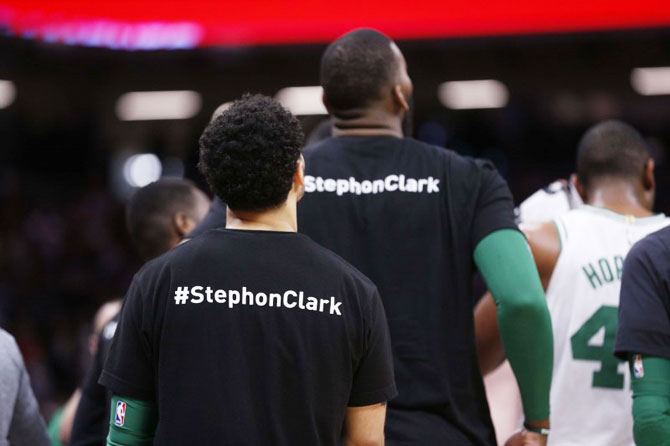 IMAGE: Members of the Boston Celtics stand on the court during a timeout against the Sacramento Kings in the third quarter at Golden 1 Center. Photograph: Cary Edmondson-USA TODAY Sports

Street protests on Thursday paralysed traffic in downtown Sacramento for hours before demonstrators converged on the Golden 1 Center, preventing many late-arriving Kings fans from entering the arena and delaying the start of the game.

In the public service spot played on Sunday, Kings point guard De'Aaron Fox began, "These tragedies have to stop." He was followed by expressions of defiance from Kings' guard Garrett Temple and Celtics forward Al Horford, who declared, respectively, "We will not stick to sports," and "We will not shut up and dribble."

The NBA's support stood in sharp contrast to the sometimes hostile reception National Football League players have received from their league and owners to protests they have staged against racial bias in the criminal justice system by refusing to stand during the national anthem.

NBA players have rallied to the Black Lives Matter before, notably in 2014 by donning T-shirts with the slogan "I can't breathe" in protest of the death of Eric Garner in the custody of New York police officers who put him into a chokehold.

© Copyright 2020 Reuters Limited. All rights reserved. Republication or redistribution of Reuters content, including by framing or similar means, is expressly prohibited without the prior written consent of Reuters. Reuters shall not be liable for any errors or delays in the content, or for any actions taken in reliance thereon.
Related News: Sacramento Kings and Boston Celtics, National Football League, Stephon Clark, NBA, IMAGE
SHARE THIS STORYCOMMENT
Print this article 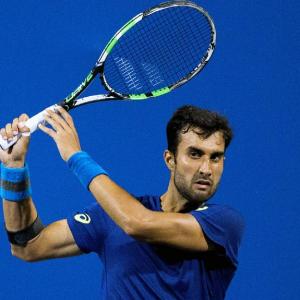 India's No 1 player Yuki pulls out of Davis Cup tie 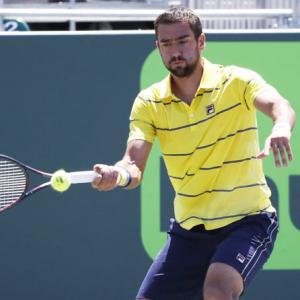