The heavily anticipated new era of Los Angeles Lakers basketball began with a whimper as their much vaunted team bristling with All-Stars were beaten 99-91 by an under-strength Dallas Mavericks on Tuesday.

Five-time NBA champion Kobe Bryant had given the Lakers a late boost when he pronounced himself fit enough to play in the regular season opener shortly before the game, having struggled with a foot injury for more than a week.

Though Bryant scored 22 points on 11-of-14 shooting and Spanish forward Pau Gasol weighed in with a game-high 23, the Lakers paid the penalty for a dismal free-throw display, making only 12-of-31. Dwight Howard made only three-of-14. 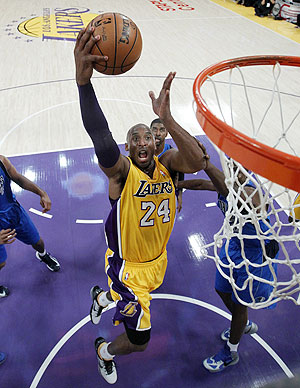 The Mavericks were without 11-time All-Star Dirk Nowitzki, who is recovering from knee surgery, and injured center Chris Kaman but in their absence, six Dallas players scored at least 10 points with guard Darren Collison leading the way with 17.

Brandan Wright contributed 14 and fellow forward Shawn Marion 11 as the Mavericks stunned the 16-time NBA champion Lakers despite being out-shot from the field by 49.4 percent to 47.1.

"Defensively we didn't give the multiple effort that we needed to give, especially guarding the pick-and-roll," Lakers coach Mike Brown said after the game had ended in front of a subdued, near-silent crowd at the Staples Center.

"We're going to have to defend with multiple effort until our defense catches up with our offense. Obviously we're going to have free throws down. Whether or not it's a tight ballgame, 38 percent (free-throw shooting) as a team is tough."

"It's not the way we wanted it to go," said the seven-foot Spaniard. "We know it's not going to happen for us right away, but we've just got to stick with it."

The atmosphere was electric under the rafters at the Staples Center well before the start of the game as Lakers fans prepared to watch their potent, new-look front five for the first time.

Huge cheers erupted when former Orlando Magic center Howard led the Lakers out onto the court for their warm-up, and even louder roars for Bryant, the last player out.

Shortly before tip-off, Bryant walked to the middle of the court with microphone in hand and said: "As you know, we have a lot of expectations this season. We're trying to live up to the expectations.

"We will try and bring another championship back to where it belongs, back to Los Angeles. Let's get this party started! Enjoy the show."

With Bryant, Howard and Gasol all getting into the paint early on, the Lakers made an encouraging start and led by eight points after an Antawn Jamison layup less than a minute into the second period.

However, a rash of missed free throws and turnovers cost the Lakers dearly. They trailed 48-46 at halftime and were never able to close the gap after that as the faster Mavericks steadily increased their lead.

Two OJ Mayo free throws late in the fourth quarter gave Dallas a 16-point advantage, the biggest of the night, and though the Lakers scored nine of the last 10 points, it was a case of too little too late.

Six-time All-Star Howard, still easing his way into form after having back surgery in April, produced 19 points while twice former Most Valuable Player Steve Nash contributed just seven, plus four assists, on their Lakers debuts.

"We kept the tempo going, we were efficient with the ball and we re-bounded," Mavericks coach Rick Carlisle said. "It's a great win.

"If you execute in this league and have talent, you have a chance to win, and we did that. The Lakers are going to be fine. They've got a lot of new guys and a new system, but we were opportunistic tonight and got the job done."

Heat ring in new season with win over Celtics

With shiny new rings on their fingers, the Miami Heat began their NBA title defence in confident fashion with a 120-107 win over Eastern Conference rivals the Boston Celtics on Tuesday.

Miami were presented with championship rings before the game to mark their second NBA title and the first since the creation of the 'Big Three' with the arrival of Lebron James and Chris Bosh to team up with Dwyane Wade.

Ray Allen made his Miami debut against his old team and put aside any concerns about his fitness with 19 points as the home crowd taunted the Celtics with chants of "We got Ray!".

Last season's Most Valuable Player James marked his first ring ceremony with 26 points but had to sit out most of the fourth quarter with leg cramps.

Wade top scored with 29 points, while Bosh delivered down the stretch and finished with 19 points.

Miami were 19 points up early in the fourth but, in the absence of James, Boston launched a comeback and reduced the deficit to four with just over two minutes remaining on the clock.

The Heat rallied, however, to gain a win against the team they defeated in last year's Eastern Conference championship game.

Paul Pierce had 23 points and Rajon Rondo 20 for the Celtics.