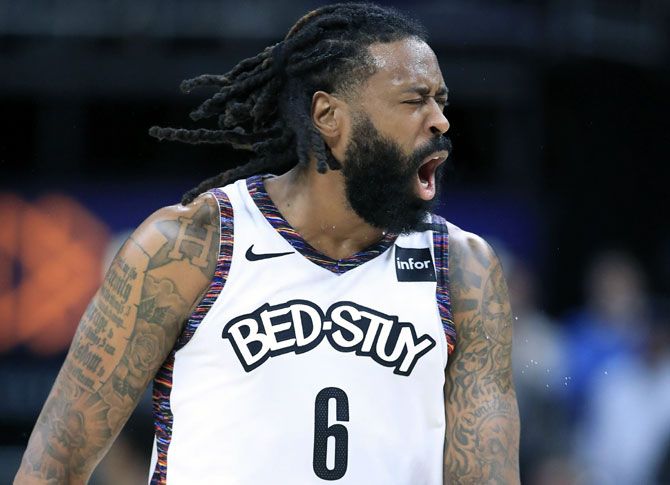 IMAGE: Brooklyn Nets' DeAndre Jordan confirmed his positive test on Twitter and said he would not return to action when the season resumes on July 30 at Disney World in Orlando, Florida. Photograph: Andy Lyons/Getty Images

Brooklyn Nets duo DeAndre Jordan and Spencer Dinwiddie said on Monday they have tested positive for COVID-19, the news coming as the NBA prepares to resume the 2020 season next month.

Jordan confirmed his positive test on Twitter and said he would not return to action when the season resumes on July 30 at Disney World in Orlando, Florida.

"Found out last night and confirmed again today that I've tested positive for Covid while being back in market. As a result of this, I will not be in Orlando for the resumption of the season," Jordan tweeted.

Dinwiddie released a statement to The Athletic confirming his diagnosis but did not rule himself out.

The NBA had previously reported 16 positives out of 302 players tested on June 23 but did not disclose their identities.

NBA commissioner Adam Silver had said last Friday that the season could again be put on hold if there is a "significant spread" of COVID-19 among its players in Orlando.

Players are set to begin travelling to Orlando on July 7.