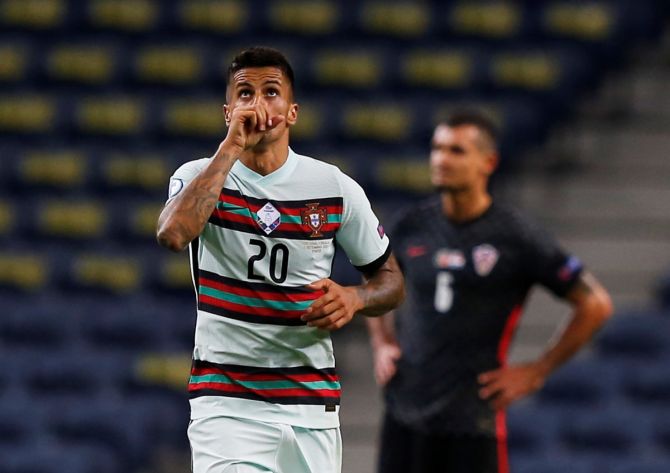 Nations League holders Portugal made light of Cristiano Ronaldo's injury absence as they swept aside Croatia 4-1 in their opener in the competition on Saturday.

European champions Portugal, in impressive form on their return to action after a 10-month new coronavirus hiatus, hit the woodwork three times before Joao Cancelo fired them ahead four minutes before halftime in the League A Group Three match.

Diogo Jota and Joao Felix both scored their first international goals in the second half before Bruno Petkovic pulled one back and Andre Silva then added a fourth.

Ronaldo, who is on 99 international goals, was ruled out with a toe infection while Croatia were missing key midfielders Luka Modric and Ivan Rakitic after their federation agreed not to pick them before the start of the European club season.

It was the first time Ronaldo had missed a Portugal game since November 2018.

Nikola Vlasic nearly gave Croatia a second-minute lead when his shot was tipped around the post by Anthony Lopes but after that it was all Portugal.

But their luck ran out when Cancelo scored before the break with a curling left-foot shot from the edge of the area.

As Portugal continued to dominate after halftime, Guerreiro chipped the ball over the Croatia defence to Jota who controlled it on his chest and slotted his shot home almost on the hour.

Joao Felix, 20, also scored in the 71st minute with a powerful shot which Livakovic got a hand to but could not stop.

Although Petkovic pulled one back in stoppage time, Portugal substitute Silva slid in a fourth goal from Pepe's header with the last kick of the game.

World champions France beat Sweden 1-0 in Stockholm in the other game in the group. 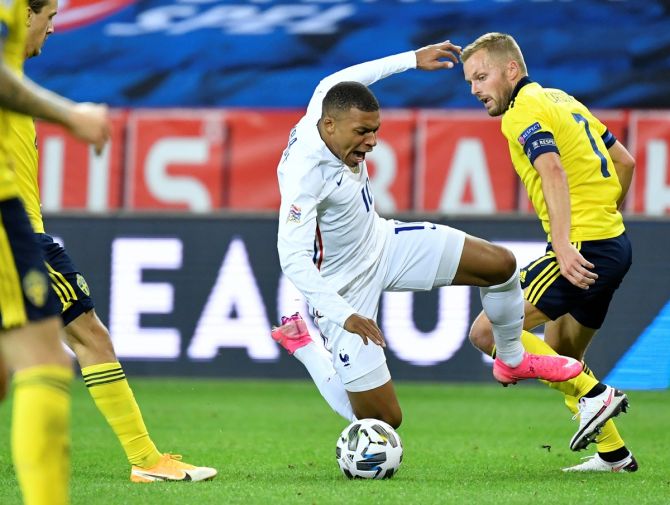 A slice of luck and a moment of individual brilliance during a mazy run from Kylian Mbappe gave France a gritty 1-0 win away to Sweden in their Nations League A Group 3 clash on Saturday with Antoine Griezmann even missing a last-minute penalty.

France coach Didier Deschamps tried a new 3-4-1-2 system but the Swedes, promoted to the competition's top tier after their group victory last year, frustrated the world champions for the first 40 minutes until Mbappe proved to be the difference.

The 21-year-old Paris St Germain striker got a fortunate bounce off a defender's legs as he danced through the right side of the Swedish defence before beating goalkeeper Robin Olsen from a very tight angle at his near post.

With the clock ticking towards 90 minutes, Sweden winger Emil Forsberg forced a fine save from Hugo Lloris and Marcus Berg thumped a shot that was deflected wide for a corner that the hosts could not capitalise on as France held firm.

Anthony Martial, who was in the French squad for the first time since March 2018 and came on in the second half for Mbappe, was brought down by Victor Lindelof for a late penalty.

However, Griezmann fired over over the bar with the final kick of the game and, despite France's attack failing to fire, Deschamps declared himself satisfied with the result.

"Not everything was perfect. It's a new system that worked pretty well, (but) we could have done better in attacking terms," he told French TV channel M6.

Mbappe was pleased with his coach's tactical switch.

"I like being closer to goal in this system, it makes me happy. I think its a system that suits the characteristics of other players in the team too, and we'll work on it to make it work," he said.

On Tuesday, Sweden host Portugal, who beat Croatia 4-1 on Saturday, while France take on the Croatians in Paris. 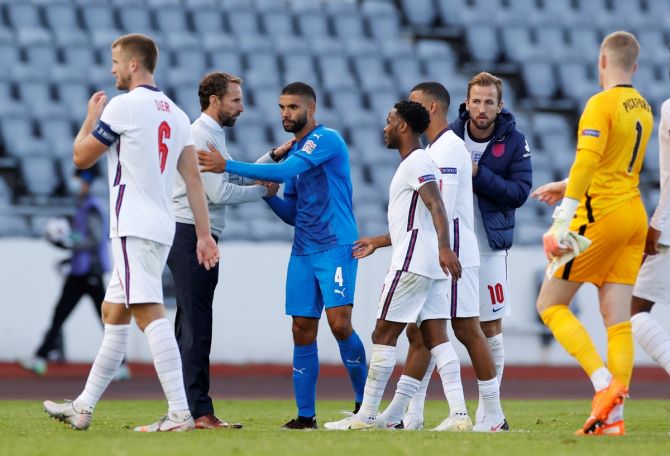 England's Raheem Sterling converted a 90th minute penalty to snatch a 1-0 win away to Iceland in their opening Nations League match on Saturday after the home side themselves missed a spot kick in stoppage time that would have salvaged a draw.

Sterling got the decisive goal from the spot, after a disappointingly drab game, when Sverrir Ingi Ingason was harshly ruled to have handled the England striker's shot.

Ingason, who had thrown his body at the close-range strike, was also sent off for the handball, leaving both teams reduced to 10 men after England full-back Kyle Walker picked up a second yellow card in the 70th minute.

But Iceland, who famously beat England at Euro 2016, had their opportunity to get a draw from the League A Group 2 match when Joe Gomez brought down Albert Gudmundsson inside the box.

However, Birkir Bjarnason fired his penalty high over the bar to leave Gareth Southgate's side with the three points.

"We get the penalty and Raheem's drive and desire was outstanding and then there's another lesson we have to learn," said Southgate.

The game, held behind closed doors due to COVID-19 restrictions, had the air of a pre-season friendly with both squads missing some key players and still short of full fitness and sharpness.

Iceland lost their main striker Kolbeinn Sigborsson, whose goal knocked England out of the Euros in France four years ago, due to an injury in the pre-match warm-up.

England centre-forward Harry Kane had the ball in the net in the seventh minute, sliding in to meet a cross from Sterling, but he was ruled to have been offside.

Television replays suggested the goal should have stood with Kane in an onside position but there was no VAR technology in use to check the decision.

England dominated possession after the break, with Iceland content to defend in numbers, but Southgate's side created very little with their predictable passing and one-paced approach causing few problems until the penalty award.

He was pleased to have given a debut start to Manchester City midfielder Phil Foden and to have brought on Manchester United striker Mason Greenwood for his first appearance but acknowledged his team had been far from at their peak.

"It was a real mixed bag, we started well, we were sharp for 20 minutes. The disallowed offside goal should stand I think and that would have had a big bearing," added Southgate.