Mumbai's Aditya Mehta, the lone Indian on the world professional circuit, lived up to his reputation, defeating former champion Alok Kumar of Punjab 6-2, to clinch the title in the 78th National snooker championship in Chennai on Tuesday.

"I have been dreaming of this day for many years now. I came close to realising it in 2008, but lost to Pankaj Advani in the final. This time I was determined to win. Right now I don't know what to say or how to react. I guess it hasn't quite sunk in," said Mehta. 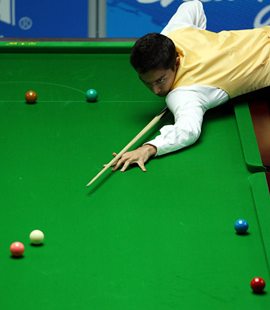 Thrilled to win the title with his mother watching from the stands, Mehta said, "I hardly get to see my mother because of my snooker commitments. It was special she was here to watch me win."

Mehta stayed clear from Alok in an encounter that did not allow either player hold on to any good lead.

"It was one of those days when things were not really going my way or for that matter, Alok's. So I decided to take what was on offer rather than try anything spectacular."

Mehta felt the turning point was in the early frames when Alok had a chance to go 3-1 up, but ended with him taking a two-frame lead to widen it to 4-1.

Mehta took the third frame on a re-spotted black, the fourth on a yellow-to-pink clearance and the next on the back of a 40 clearance.

Alok complimented Mehta, saying he is one of his favourite players.

"He played better and I am very happy for him. I was struggling throughout as I had not put in enough time to practice."

Earlier, these two Petroleum Sports Control Board stars progressed to the final defeating debutants in the last four.