Saturday's match between Djokovic and Nadal will be the 50th between the two great rivals, who have won a combined 26 Grand Slam titles.

Djokovic has won 26 of their previous meetings including the last seven. Nadal last beat the world number two in the 2014 French Open final. 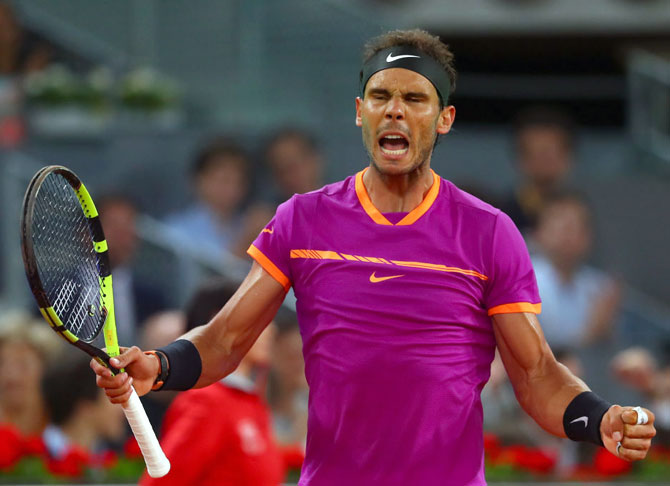 The pair served up a sizzling second set, especially in the seventh game when Nadal finally broke the Belgian for a second time in the set at the fourth attempt after sensational rallies which had spectators in the Caja Magica rising to their feet in appreciation.

"It was a beautiful game, we both played at the very highest level and there were great points for everyone to see," Nadal told Spanish Television.

"He (Goffin) demands the most of you, he's one of the best in the world, one of the candidates to win the most important trophies.

"I knew I was playing well in the first set but I just couldn't take my chances. Winning is very important but also the way I'm playing at the moment makes me very relaxed."

Nadal has made a storming start to the claycourt season, winning the Monte Carlo Masters and the Barcelona Open for a record-extending 10th time last month.

Saturday's match between Djokovic and Nadal will be the 50th between the two great rivals, who have won a combined 26 Grand Slam titles.

Djokovic has won 26 of their previous meetings including the last seven. Nadal last beat the world number two in the 2014 French Open final.

The Madrid Open started the rivalry, with the Caja Magica witnessing an engrossing semi-final in 2009 lasting over four hours which Nadal won after saving three match points.

"It will be a very difficult match against one of the best sportsmen this sport has ever had, and to have a chance I'll have to be at my very best," Nadal said.

The Spaniard also dismissed the suggestion he had a stronger chance against Djokovic given the Serbian's slow start to the year. He was beaten by qualifier Denis Istomin in the second round of the Australian Open.

"Ninety-nine percent of players would accept to have the type of slump Djokovic has had," Nadal said.

"His so-called slump has seen him fight for the number one ranking in the last game of the year. Let's have a bit of respect. Djokovic has always been super consistent. I'm expecting the best Djokovic tomorrow."

Defending champion Djokovic reached the last four without hitting a ball as his quarter-final opponent Kei Nishikori withdrew due to a wrist injury.

The same problem forced world number eight Nishikori, seeded sixth in Madrid, to miss the Barcelona Open last month but he is hoping to be fit for next week's Rome Masters.

Croatian Borna Coric, conqueror of world number one Andy Murray in the third round, plays Dominic Thiem of Austria later on Friday with the winner meeting Pablo Cuevas in the other semi-final after the Uruguayan beat German Alexander Zverev 3-6, 6-0, 6-4.