The absence of defending champion Kenneth Mungara has placed his Kenyan compatriot and last year's runner-up David Tarus as the hot favourite for the men's crown.

Tarus has come here after having finished a creditable sixth in an impressive two hours, nine minutes and 24 seconds at Eindhoven last October, but can expect stiff competition for the top prize of $ 35,000 from compatriot Daniel Kiprugat.

The course record for the men stands at 2:11.51, set last year by Mugara, while the record for women is 2:34:08, held by three-time winner Mulu Seboka of Ethiopia, set in 2008, who is bidding to regain her crow from last year's winner and compatriot Haile Kebebush.

This year's race will see the runner traversing the newly-opened Rajiv Gandhi Sea Link, a 5.6 km stretch over sea which bridges Worli and Bandra.

Kiprugut is the fastest contender in the men's field following his 2:08:38 in the Paris Marathon last year.

On his first visit to India, Kiprugat hoped that the weather would be good on Sunday.

"I am happy to be running in Mumbai. It was raining when I left from Kenya. But the weather is good here and I hope it remains the same even on Sunday," he said.

The other leading male runners are Ethiopia's Gebo Burka, winner of the Alps Marathon in 2009 with a personal best of 2:10:18 set at the Cannes Marathon last November and Kenyan compatriots Luka Chelimo and Henry Cherono with identical personal bests of 2:10:26.

However, Africans cannot take things lightly as there are East European runners who can give them good competition with timings hovering around the 2:10 mark.

The only question mark is how well they can tackle the weather in Mumbai after spending time at home in freezing temperatures.

According to Elite Athlete co-ordinator Ian Ladbrooke the men had targeted to dip below 2:10 and the women aiming to crack 2:30.

In the women's race, Seboka and her country rival Kebebush, are set to face strong opposition.

The Kenyan challenge will be spearheaded by Alice Chelangat, with Irene Jerotich and Rose Kosgei the other notable names.

Jerotich clocked a career-best 2:28:57 at high altitude in Nairobi Marathon last October to win the race while Chelagat, who finished second, has a personal best of 2:27:29 while finishing fifth at Dubai in 2008.

Kosgei, a 69-minute half marathoner and a former world junior silver medalist in 1500 metres, is making her debut in Mumbai and will also be a name to reckon with.

There are eleven other Ethiopian contestants in the women's field.

Youngster Firehiwot Dado, who has clocked two sub 2:30 timings in 2009. She clocked 2:27:08 while winning the Roma Marathon in March and 2:29:20 while finishing 4th in Frankfurt seven months later, is the best among this lot.

Others in the field include Russia's Natalya Volgina, the second place finisher at Paris three years ago with a career best 2:27:32.

Hugh Jones, race director for the IAAF Gold label event, has predicted the route to be a "little" faster this time.

"To work the route on the sea link was a major exercise. It was necessary for us to embrace such a powerful symbol of the city. Topographically there isn't much difference, except that marathoners will be running over the sea for a while than on road," said Jones in the run-up to the event.

"There will be a small difference, but if the weather is kind on race day then we can expect something big," he said.

Ladbroke felt that sea link might give the runners a lift. "There will be a lot of excitement for sure. And that could help in giving better timings," he predicted. 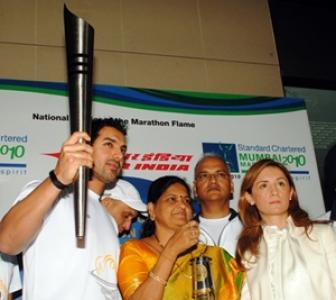