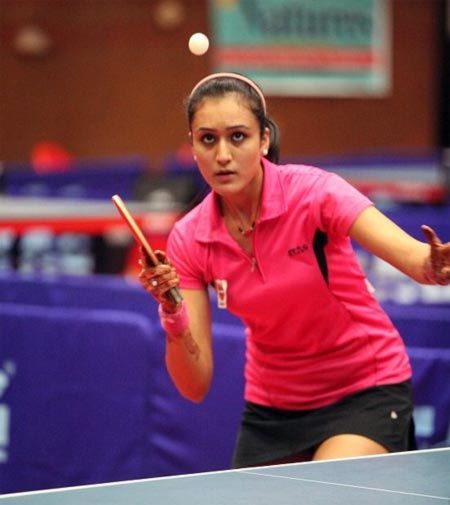 Manika Batra and Mouma Das made history by becoming the first Indian pair to reach the quarter-finals of the World Table Tennis Championships in Dusseldorf, on Thursday.

Mouma and Manika created history with luck on their side as they got a walkover from the Netherlands and Polish combination of Li Jie and Li Quian, with the latter reportedly hospitalised on Wednesday night after falling sick.

"I don’t know what to even feel. It’s just sad that our opponents could not play the match. But at the same time, I am so elated that we have created history for our country," said Mouma when asked about the feat.

They will next play the No. 1 and 2 Chinese players -- Ding Ning and Liu Shiwen -- a lethal left and right combination, in the quarter-finals on Friday.

Sharath, ranked 43 in the world, defeated the Ukrainian, ranked 24, rather easily without wasting much time.

The 20th seed, however, put in his best efforts in the third game when he managed to stretch the Indian. But that was all he could do as Sharath, running into a nice rhythm, simply ran past his rival in quick time to advance.

In his next round, the top-ranked Indian will meet either Austrian Habesohin or Chinese Lin Gaoyuan on Friday.

"I got into a groove very early and my backhand came off nicely. I am taking one match at a time and I am not worried about my next round opponent," said Sharath.

In the women's singles Manika had a tough match against Korean Kim Kyungah, seeded 27 and ranked 46 in the world, in the round of 64.

The former national champion just about managed to win the first game but could not do much against the rampaging Korean who was strong on her forehand. The Korean won 3-11, 11-5, 11-6, 11-6, 11-8 for a next round showdown with Chinese Zhu Yuling.