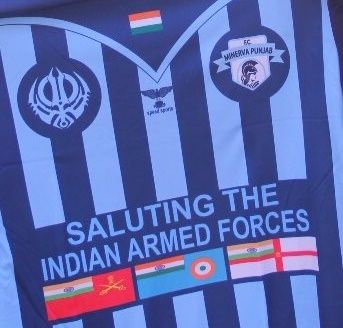 Defending champions Minerva Punjab FC, who pulled out of their I-League clash against Real Kashmir in Srinagar citing security concerns, will get a re-match, the All India Football Federation has ruled but the debutant side has decided to challenge the order.

"With the current situation in Kashmir not conducive to conduct a match, and keeping in mind the current extraordinary situation as well as the desire of teams to play football on the field, the match stands rescheduled to be held after March 6, 2019, at a time and location feasible for AIFF, and the participating teams," the AIFF said in a statement.

It is learnt, the match could be held in Delhi on March 12.

Officials in Real Kashmir said the club is likely to file an appeal against the decision and called it 'against the laiddown norms of FIFA'.

The club, which is at present fourth in the I-League points table, cited a 2006 national Football League match between Air India and Fransa-Pax. Fransa-Pax had not turned up for the match, citing poor refereeing in a previous game. The AIFF called for a re-match but Air India challenged the call before a jury and were awarded three points.

Minerva, on the other hand, maintained that the AIFF failed to give written security assurances that were sought by the club after the terror attack which killed more than 40 CRPF personnel.

"Minerva had always maintained their stance that security was the main concern regarding the team's decision to not travel to Srinagar for the match against Real Kashmir," club owner Ranjit Bajaj said in a statement.

"The club's stance has now been vindicated by the committee's decision," he added.

Real Kashmir had asserted that the situation in Srinagar was "safe and was under control" on the match day and and security was in place, including a team bus with bullet-proof escort vehicles waiting at the airport.

However, while referring the matter to the AIFF Emergency Committee, the I-League Committee said there was "nothing in writing which may demonstrate that they (Real Kashmir and AIFF) have given any undertaking or assurance for the safety of the players and the match officials, as requested by the Minerva."

The AIFF Emergency Committee, comprising president Praful Patel, five vice-presidents and general secretary, ruled on Monday that the match be rescheduled to or after March 6 at a time and location feasible for AIFF and the participating teams.

"The (Emergency) Committee firmly believes that football is apolitical and must continue to be a humane expression of conciliation and solidarity with everybody affected by terrorism.

"The best way to do that is by playing, albeit in a safe and secure environment ... keeping in mind the peculiar situation as well as the desire of teams to play football on the field the match stands rescheduled," the Committee said.

The Emergency Committee took up the matter after a referral by the I-League Committee.

"...the match which was originally scheduled to be played at Srinagar between Real Kashmir FC and East Bengal on 28 February, 2019 was also shifted to New Delhi."

I-League Committee CEO Sunando Dhar said the AIFF will wait for a reply from Real Kashmir on the decision of the AIFF Emergency Committee before deciding on the date and venue of the re-match.

"We have communicated this to Real Kashmir (since they are the host team) and we will take a decision (on the venue and date) after they give a reply. The plan is to have the match before the Super Cup preliminary round starts (on March 15)," Dhar said.

"I don't want to say anything on date and venue now," he added.

Asked if there was still a chance of the match being held in Srinagar, Dhar said, "Let us wait for what Real Kashmir wants, in their reply."

Real Kashmir had turned up for the game last month, asserting that all the security arrangements were in place and they be awarded the three points after Minerva's no-show.

Minerva went on to argue that their pullout could not be considered a forfeiture as it was on security grounds. The club refused to forego the three points, taking the matter to the Delhi High Court.

The court asked Minerva to go back to the AIFF I-League Committee for a resolution.

"...the clubs have certain international players which may also (be) a reason of concern of their respective securities in Kashmir. Further, safety and security of anyone cannot be ignored in the time of extreme volatile situation prevailing in Kashmir," the I-League Committee said after its meeting on February 25.

Real Kashmir, in a letter to the AIFF, stated that the match had been given the all-clear by the security agencies in Jammu and Kashmir.

Both the clubs are already out of title contention. The last scheduled I-League match is on March 9.