Twenty-seven top male and female triathletes, who have already qualified for the 2008 Beijing Olympics, are in the field for the triathlon event of the fourth Military World Games (MWG), to be held at Mumbai's Girgaum Chowpatty, on October 21, 2007.

Competitions will be held in individual and team (men's and women's), apart from a mixed team, events (three male and two female participants). 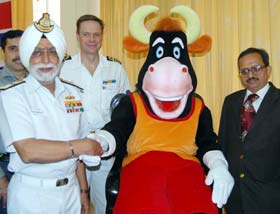 Germany's Stefen Justus and Joelle Franzmann are rated the best on the basis of Beijing qualification.

The fourth MWG, from October 14-21 at Mumbai and Hyderabad, is being held outside Europe for the first time, the earlier venues being Rome (1995), Zagreb, Croatia (1999) and Catania, Italy (2003). Pakistan declined to take part, informed Vice-Admiral Bedi, even after invitations were sent.

Counsel International du Sport Militaire (CISM)'s Vice-President, Navy Captain Bengt Nylander, said: "It is sad that we could not get all nations to take part. Countries at conflict have taken part at previous Military World Games because we are soldiers for peace."

CISM, headquartered in Brussels, commands a membership of 128 nations and conducts championships in 20 disciplines annually, apart from MWG every four years.

Rio de Janeiro, Brazil, will host the next MWG in 2011, selected by the CISM members ahead of Ankara (Turkey) and Islamabad (Pakistan), informed Nylander.