The Italy forward, suspended by Samp since October after verbally abusing the club president, is expected to sign formally for the Serie A leaders once the transfer window opens in early January.

The club have not given details of the deal but media reports said Milan, Samp and the player had equally split a five million euro sell-on clause owed to former owners Real Madrid. 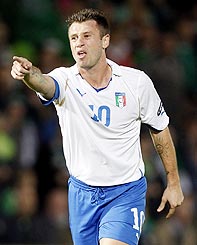 Milan hope to gain Samp's permission for the 28-year-old to go on their mid-season training camp in Dubai given Serie A does not resume until January 6.

Despite Cassano's chequered past, Milan have gained a much-needed extra forward as injuries to Filippo Inzaghi and Alexandre Pato have meant Zlatan Ibrahimovic has been bearing too much of the scoring burden.

The skilful attacker's arrival will increase speculation that out-of-favour Ronaldinho could be heading for the Milan exit door with his contract up in June.

Former AS Roma frontman Cassano has become a key part of Cesare Prandelli's new-look Italy and will now hope to return to the national team having missed last month's friendly with Romania because he was not match fit.

© Copyright 2021 Reuters Limited. All rights reserved. Republication or redistribution of Reuters content, including by framing or similar means, is expressly prohibited without the prior written consent of Reuters. Reuters shall not be liable for any errors or delays in the content, or for any actions taken in reliance thereon.
Related News: AC Milan, Antonio Cassano, Samp, Alexandre Pato, Zlatan Ibrahimovic
COMMENT
Print this article