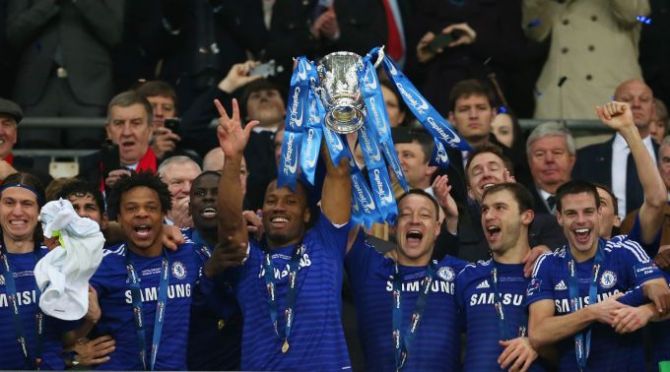 John Terry embellished his status to Chelsea fans as “captain, leader, legend” by scoring the goal that set his side on the way to a 2-0 win over Tottenham Hotspur in the Capital One Cup final at a rain-sodden Wembley on Sunday.

The former England captain was once again a quite inspirational presence for the club that adores him as he defended like a lion and scored a 45th-minute goal to ease Chelsea nerves before Kyle Walker's deflected own goal from a Diego Costa shot settled the final in the 56th minute.

It meant an ecstatic Terry lifting the League Cup 10 years since he first did so under Jose Mourinho’s watch -- and just as in the last reign of ‘The Special One’, he will be hopeful that it signals an era of supremacy for the west London club.

It capped a perfect day for Chelsea, which may effectively have seen them claim two trophies, after their nearest Premier League title challengers Manchester City lost at Liverpool. 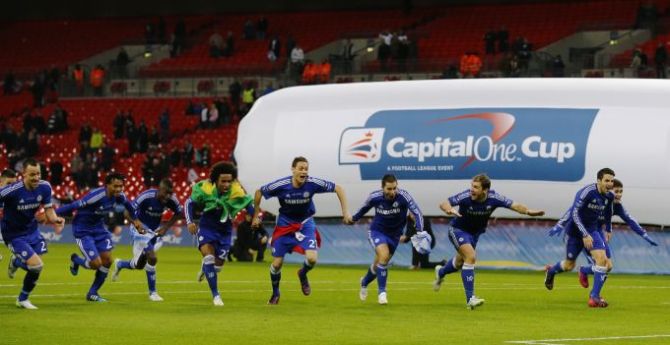 They are now five points clear with a game in hand and Mourinho, fresh from ending his personal drought of not having won any trophy for three years, still has a treble in his lofty sights with the Champions League also on the agenda.

There could be no argument about Chelsea’s superiority against a side who thrashed them on New Year’s Day even though Spurs had the better of a poor first half in which the one moment of real quality was when Christian Eriksen’s free kick for Spurs rattled Petr Cech’s bar.

Most interest seemed to stem from Costa’s desire to enjoy a war with everything that moved until Branislav Ivanovic was awarded a free kick on the right wing just before halftime, skillfully controlling Terry’s aimless hoiked effort towards the touchline and drawing the foul from Nacer Chadli. 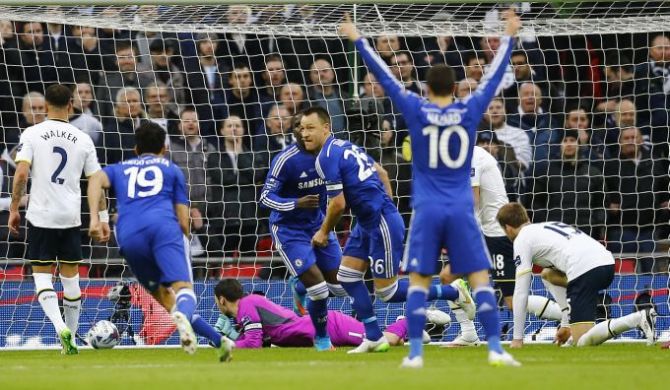 Chelsea's John Terry celebrates after scoring the first goal for his side. Photograph: Darren Staples/Reuters

As the rain careered down after the break, Cesc Fabregas found Costa on the left edge of the box and his shot-cum-cross took a cruel deflection off Walker, beating hapless Spurs keeper Lloris on his near post.

Tottenham's efforts to conjure a response were fairly soggy, with Eden Hazard and Fabregas coming closest to adding to the lead, and even when they did threaten, the immaculate Terry made a superb intervention to block Harry Kane.

Mourinho’s sentimental side then shone through as he brought Didier Drogba on in the 93rd minute, reuniting the three survivors of the 2005 triumph, Drogba, Terry and Cech.

© Copyright 2021 Reuters Limited. All rights reserved. Republication or redistribution of Reuters content, including by framing or similar means, is expressly prohibited without the prior written consent of Reuters. Reuters shall not be liable for any errors or delays in the content, or for any actions taken in reliance thereon.
Related News: John Terry, Jose Mourinho, Didier Drogba, Chelsea, Reuters
COMMENT
Print this article