Chelsea returned to their early-season form to open up a five-point lead in the Premier League, Cristiano Ronaldo and Lionel Messi continued to make mincemeat of La Liga defences and Juventus extended their lead in Serie A.

In France, Olympique Lyonnais retained top spot with a 2-0 win at RC Lens. Chelsea's Oscar celebrates after scoring against Swansea City during their English Premier League match at the Liberty Stadium in Swansea, Wales on Saturday. Photograph: Rebecca Naden/Reuters

Chelsea manager Jose Mourinho described his side's 5-0 victory at Swansea City as the "perfect performance" and his weekend got even better on Sunday when Manchester City's 12-match unbeaten league run came to and end.

Two goals apiece for Oscar and Diego Costa before halftime sealed the points for a rampant Chelsea who opened up a five-point gap at the top ahead of City's home game with Arsenal.

Arsenal produced their best away display of the season to win 2-0 with Santi Cazorla and Olivier Giroud on target.

Chelsea have 52 points from 22 games with City on 47 and Southampton on 42 after a 2-1 victory at Newcastle United.

Manchester United, who won 2-0 at Queens Park Rangers, have 40 points with Arsenal a point back in fifth. Real Madrid ensured top spot in La Liga at the midway point of the season when Cristiano Ronaldo struck twice in a 3-0 win at Getafe on Sunday before Lionel Messi's hat-trick helped Barcelona win 4-0 at Deportivo La Coruna.

- Real see off Getafe thanks to Ronaldo double

The prolific pair were again in scintillating form but champions Atletico Madrid ensured they stayed in the hunt with a 2-0 success at home to bottom club Granada that lifted them back into third place.

Ronaldo, who was voted the world's best player for a third time on Monday, has an astonishing 28 goals in 17 La Liga appearances this term, with Messi on 19 from 19 games. 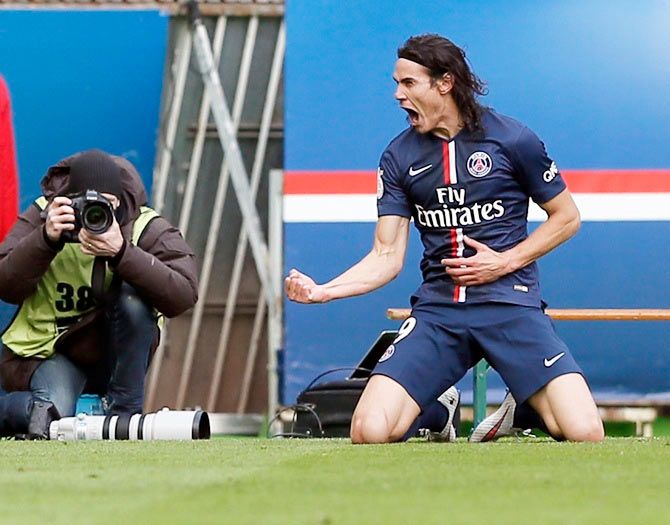 Olympique Lyonnais retained the lead with a 2-0 win at RC Lens on Saturday, notably thanks to Alexandre Lacazette's 20th goal of the season.

Lyon have 45 points from 21 games and lead Olympique de Marseille by one point after Marcelo Bielsa's side left it late to beat En Avant Guingamp 2-1 with goals by Mario Lemina and Andre-Pierre Gignac.

Paris St Germain claimed their first win from their last four league games when they beat visiting Evian Thonon Gaillard 4-2 to move up to third.

Laurent Blanc's side trail OL by four points while St Etienne are five points down in fourth after being held to a goalless draw at Stade Rennais also on Sunday. Carlos Tevez of Juventus celebrates after scoring against Hellas Verona during their Italian Serie A match at Juventus Stadium in Turin on Sunday. Photograph: Giorgio Perottino/Reuters

Carlos Tevez scored twice for Juventus as they increased their lead to five points over Roma who were held by Palermo.

Napoli beat Lazio 1-0 in Rome to go third thanks to an 18th minute goal from Argentine international Gonzalo Higuain.

Napoli have 33 points from 19 games, two clear of Lazio in fourth, and on course for a Champions League slot.

Reds' coach Vitor Pereira, who replaced Michel earlier this month, won his third successive game with second half strikes from Dossevi after 69 minutes and Maniatis in added time finally killing off a determined and well-organised Panaitolikos.

Olympiakos have 45 points with PAOK, 1-0 winners at home over Platianias on 43. Greece striker Stefanos Athanasiadis bagged his 10th goal of the season for PAOK, who remain in the hunt for a first league title since 1985.

Primeira Liga leaders Benfica thumped Maritimo 4-0 away on Sunday to chalk up their ninth league win in a row, and their seventh successive clean sheet.

Benfica have 46 points from 17 games and a six-point advantage over bitter rivals Porto.

Porto won 3-1 at Penafiel while Sporting Lisbon (36 points) are third after a 4-2 win over Rio Ave.

© Copyright 2021 Reuters Limited. All rights reserved. Republication or redistribution of Reuters content, including by framing or similar means, is expressly prohibited without the prior written consent of Reuters. Reuters shall not be liable for any errors or delays in the content, or for any actions taken in reliance thereon.
Related News: La Liga, Swansea City, PAOK Salonika, Messi, Olympique Lyonnais
COMMENT
Print this article 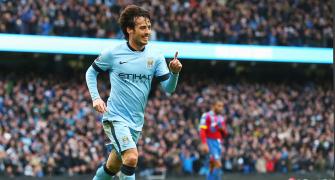 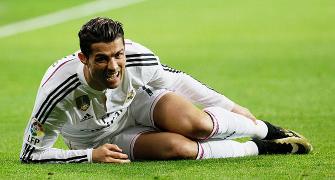 Brought down to earth, Ronaldo says, 'I'm not from another planet' 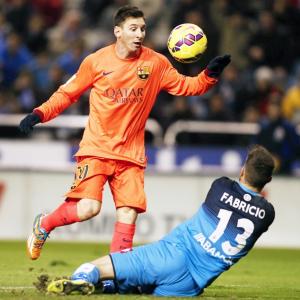 Real see off Getafe thanks to Ronaldo double