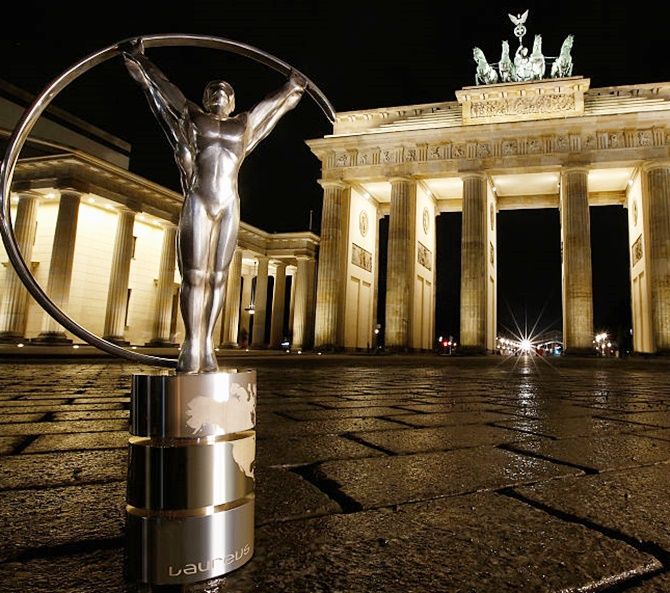 IMAGE: The Laureus Trophy is pictured in front of the Brandenburg Gate. Photograph: Boris Streubel/Getty Images For Laureus.

From soccer genius Lionel Messi to sprint king Usain Bolt, a shimmering array of the world's greatest sports stars are in the race for top honours at the prestigious Laureus World Sports Awards -- also called the 'Oscars of Sport' -- to be presented, in Berlin, on Monday.

The generous sprinkling of stars is not just limited to the men's nominations with the women's category also featuring iconic names like tennis queen Serena Williams and track and field's ‘Pocket Rocket’ Shelly-Ann Fraser-Pryce among others.

In the men's category, three-time winner Bolt and five-time Ballon d'Or winner Messi, are joined by tennis No 1 Novak Djokovic, triple Formula One world champion Lewis Hamilton along with first time nominees Stephen Curry, star of NBA's Golden State Warriors, and golf's world No 1 Jordan Spieth, who has also been nominated in the 'Breakthrough of the Year' category.

In the quintet, Messi is perhaps the biggest star to have never won this coveted trophy even though he has been nominated in five previous editions.

Winner of the Ballon d'Or for a fifth time, the Argentine genius played a crucial role in Barcelona's outstanding season last year, in which the Spanish giants won the Champions League, La Liga and the Copa del Rey treble.

Among his 43 goals in La Liga, he scored a record 32nd hat-trick for Barcelona.

Djokovic, who won this award in 2012 and '15, clinched three Grand Slams -- Australian, Wimbledon and US Open – last year and was finalist in the French Open.

He became only the third man to reach all four finals in the same year and also the first to win six Masters 1000 events in one year. In 2015, he reached 15 consecutive finalsand won 11 titles.

Bolt, on the other hand, reaffirmed his status as the greatest sprinter the world has ever seen by defending his 100 metres, 200 metres and 4x100 metres titles at the World Championships. The Jamaican superstar took his career tally to 17 world and Olympic gold medals in the year gone by.

Among the women, Serena will once again be a top contender for the coveted trophy after securing her 10th Laureus nomination. The American icon sparkled in the year gone by with three Grand Slams.

On the other hand, Fraser Pryce continued to rule the 100 metres event with her second straight World Championships gold medal, which took her overall tally to third. The 28-year-old is the only woman to be crowned 100m world champion three times (2009, 2013, 2015). Last year, she also steered the Jamaican women's 4x100m team to a world gold.

In World Team of the Year category, the Mercedes AMG Petronas Formula One Team has been nominated for the second straight year along with Rugby world champions the All Blacks, Champions League winners FC Barcelona, NBA champions Golden State Warriors, the British Davis Cup team and the US women's football team, which won its third World Cup.

The Breakthrough of the Year category has British boxer Tyson Fury and golfer Jason Day among the nominees.

The Laureus World Comeback of the Year nominations features among others, American swimming sensation Michael Phelps. The most decorated Olympian with 22 medals, including 18 gold, had retired in 2012. The 30-year-old came back to swimming last year in the US National Championships, where he won gold medals in the 100 metres butterfly, 200 metres butterfly and 200 metres individual medley, clocking the fastest time of the year in all the three events.

Nominations for the Laureus World Sportsperson of the Year with a Disability include two former winners – Brazilian swimmer Daniel Dias, who won in 2009 and 2013, and France's Marie Bochet, the 2014 winner, who had her second clean sweep of all five events at Paralympic World Skiing Championships.

From soccer genius Lionel Messi to sprint king Usain Bolt, a shimmering array of the world's greatest sports stars are in the race for top honours at the prestigious Laureus World Sports Awards -- also called the 'Oscars of Sport' -- to be presented, in Berlin, on Monday.
© Copyright 2021 PTI. All rights reserved. Republication or redistribution of PTI content, including by framing or similar means, is expressly prohibited without the prior written consent.