A hat-trick by Lionel Messi inspired Barcelona to an 8-0 rout of Osasuna in La Liga on Saturday as the champions responded with a devastating performance after a poor week by their high standards.

The Champions League holders were accused of complacency after blowing leads against Real Sociedad and AC Milan to twice draw 2-2 but they stormed into a 5-0 halftime lead against Osasuna at the Nou Camp.

David Villa scored twice, Cesc Fabregas, Xavi and visiting defender Roversio (own goal) joined Messi on the scoresheet as Barca climbed to second in the table with seven points from three matches.

"It was the same last year, people question you when you don't win but this is normal," Barca defender Sergio Busquets told Spanish television.

"We played very well, we had a lot of chances, it was a very good performance," he added.

Barca are two points behind leaders Valencia who were 1-0 winners at Sporting Gijon earlier in the day after striker Roberto Soldado scored his fifth league goal of the season. 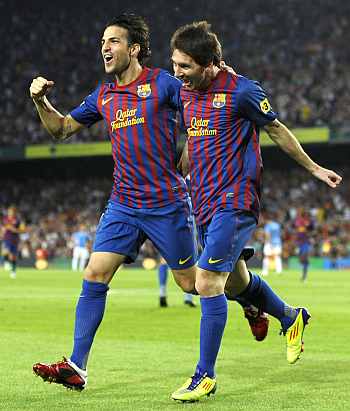 Sevilla, in third spot, joined Barca on seven points after Frederic Kanoute scored the only goal in a 1-0 home win over Real Sociedad.

Soldado, in the running for a place in Spain's Euro 2012 squad, tapped in at the back post for Valencia after Gijon keeper Juan Pablo could only parry a shot in the 29th minute.

Valencia, held to a disappointing 0-0 draw at Racing Genk in the Champions League in midweek, maintained their 100 percent La Liga record.

Malaga were 1-0 winners at Real Mallorca where a Martin Demichelis header went in off home defender Pablo Caceres just before the break.

The Andalucians had lost their first two matches without scoring but Uche's powerful 56th-minute header proved decisive as Giuseppe Rossi missed a late penalty for the visitors.

Barca were in complete control against Osasuna and took the lead after five minutes when Dani Alves headed across goal for Messi to net at the far post.

Fabregas has quickly adapted to life at the Nou Camp and his growing understanding with World Player of the Year Messi helped set up the second.

The former Arsenal captain chested the ball down to the Argentine and raced into the area to pick up a return lob and expertly volley past Andres Fernandez in the 13th minute.

Osasuna barely got a touch of the ball and Villa made it 3-0, rounding the keeper to score from a tight angle in the 34th.

Villa forced the fourth goal when he chased a long pass over the top and when his shot was saved the ball went in after taking a fortunate rebound off Roversio.

Just before the break Fabregas spun away from three defenders and squared for Messi to tap in, leaving Osasuna to trudge off shaking their heads.

Messi lifted a ball over the defence for Xavi to lob the sixth in the 57th minute before Fabregas squared for Villa to bag his second.

Messi, who also hit the woodwork twice, accelerated straight through the middle of Osasuna's demoralised defence to complete the scoring in the 79th.