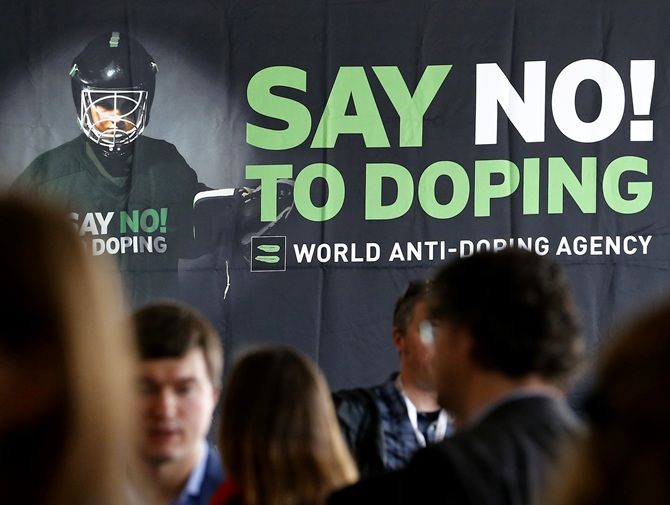 The World Anti-Doping Agency suspended the accreditation of India's National Dope Testing Laboratory for six months in a massive blow to the country's anti-doping programme, prompting a surprised Sports Ministry to brace up for an appeal.

The lab, which got WADA accreditation in 2008, is no longer authorised to carry out testing of the samples as the suspension is effective from August 20. The development is a huge setback for India with less than a year left for the Tokyo Olympics.

The National Anti-Doping Agency (NADA) can still collect samples (blood and urine) but will have to get them tested by a WADA-accredited laboratory outside India.

"This suspension has been imposed due to non-conformities with the International Standard for Laboratories (ISL) as identified during a WADA site visit," WADA stated in a media release.

"The suspension prohibits the NDTL from carrying out any anti-doping activities, including all analyses of urine and blood samples," it added.

Sports Minister Kiren Rijiju said his ministry will appeal against the WADA decision before the Court of Arbitration for Sport (CAS) in Switzerland.

"There were some issues in the past. After taking over as sports minister, I have taken cognizance of those issues and a course correction has been initiated. It is disheartening that despite these efforts, WADA has taken this stance," Rijuji said in a statement.

"We will appeal against this ban (at the CAS in Lausanne) and the process of appeal is already underway," he added.

Sports Secretary Radhey Shyam Julaniya said the move is surprising and could be a result of "business interests".

"We have addressed all concerns raised by a WADA team during its last inspection in September 2018. So, the suspension came as a surprise to us," Julaniya said.

"There is a huge business interest involved in this decision because the cost of testing in our laboratory is much cheaper than other countries," he added.

The cost of testing is now expected to shoot up and it is feared that sample collection will come down drastically because of this, casting a shadow on India's anti-doping programme.

"NDTL is separate from NADA, we do not come into the picture when it comes to testing. We only collect samples," NADA Director General Navin Agarwal said when contacted.

The Indian Olympic Association (IOA) said the nation is in no position to bear the additional expense of sending the samples to a different country, most likely the WADA-accredited laboratory in Bangkok.

"It is a huge blow to the Olympic Movement in India with the Tokyo Games just 11 months away. India's National Sports Federations (NSFs) are in no position to bear the extra cost," IOA president Narinder Batra said.

The WADA stated that its Laboratory Expert Group (LabEG) initiated disciplinary proceedings, with regards to status of WADA-accredited laboratories, in May this year.

The NDTL has been instructed to safely move all the samples lying with it to an accredited lab.

"During the period of suspension, samples that have not yet been analyzed by the NDTL; samples currently undergoing a confirmation procedure; and any samples for which an Adverse Analytical Finding (AAF) has been reported, must be securely transported to another WADA-accredited laboratory.

The WADA has instructed NDTL to address all the non-conformities that LabEG identified during their site visit.

"If the laboratory satisfies the LabEG in meeting these requirements, it may apply for reinstatement prior to the expiry of the six-month suspension period.

"Should the laboratory not address the non-conformities by the end of the six-month suspension period, WADA may extend the suspension of the laboratory's accreditation for up to an additional six months," the world body asserted.

It will be a tricky situation for the Ministry of Youth Affairs and Sports (MYAS) after it forced the BCCI to come under the NADA umbrella after dogged resistance from the Board for a decade.

"It's not our prerogative to think which accredited lab NADA will be using for the samples' testing. It's their concern and headache. As of now we will just wait and watch," a senior BCCI official said.

NADA is expected to collect 5000 samples in the run-up to the Tokyo Olympics next year.

"NADA will have to bear the cost. This will be a big burden considering the number of tests NADA conducts," Goswami said.

NADA had claimed in 2018-19 that it tested 4348 samples including 466 blood samples. This number is likely to reduce unless the ministry or the respective National Sports Federations bear extra cost for testing outside.

"NDTL can appeal this decision to CAS. Let's see if they do it. Or are they willing to accept their fault," he said.

Lesser testing could mean more dope cheats being caught during competitions abroad, which would lead to major embarrassment for the country and in tainted sports like weightlifting, it could even end up with India's suspension.