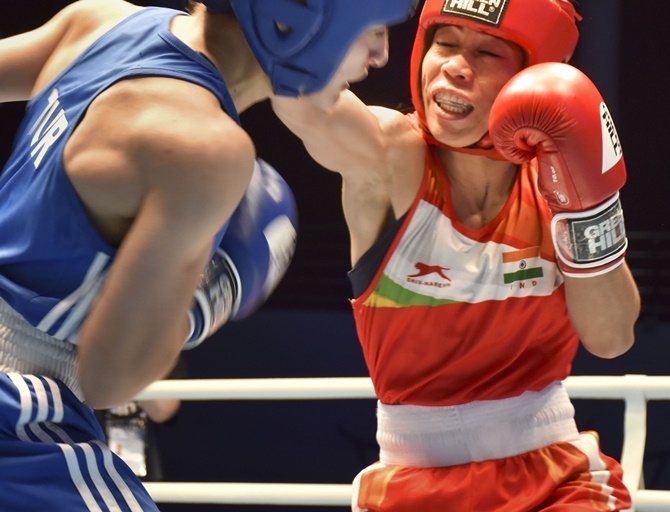 IMAGE: Mary Kom oscillated between anger and joy while dissecting her performance and the 1-4 semifinal loss. Photograph: PTI Photos

It ended with an 'unacceptable' semifinal loss but iconic Indian boxer M C Mary Kom (51kg) on Saturday asserted that she was 'proud' of her world championship campaign and it strengthened her belief of winning a second Olympic medal, come next year.

The 36-year-old fetched her eighth medal in the mega-event, a bronze, making her the most successful boxer in the history of amateur world championships.

The six-time world champion Manipuri oscillated between anger and joy while dissecting her performance and the 1-4 semifinal loss to Turkey's Busenaz Cakiroglu, which India tried to challenge without success.

"I am certainly very unhappy with the judging. This loss is unacceptable to me," Mary Kom said.

"I could never imagine that something like this would happen to me. I am quite shocked," she added.

But then comes the sense of pride for her performance given that she fought taller and younger opponents all through.

"I think I did very well overall. It is perfect now, yeah it is precious," she said, referring to the fact that it was her first world medal in the 51kg category, in which she claimed one in the Olympics back in 2012.

All her previous world medals have been in the 48kg and, before that, 46kg categories.

"I think I found the right balance for 51kg category in this world championship. I knew how much effort I needed to put in, the plans and strategies also worked out quite well," she added.

Her previous two attempts at 51kg world medals were thwarted at the quarterfinal stage. And for this reason, she does rate this medal highly but her bigger source of joy is something else.

"It has made things easier for me in terms of planning for Olympics. I had never fought the girls I fought this time and you know what, I think it wasn't all that difficult beating them," she laughed.

"So I have got a good idea of what awaits me in the Olympic qualifiers and I now have the confidence that I can beat that. The performance has made me stronger, I have got fresh confidence for that Olympic dream. That was the whole plan to start with," she added.

The Olympics in Tokyo are scheduled in July-August next year and the first boxing qualifiers for the showpiece will be held in February in China.

"I have got the best support I could have hoped for, whether it's my family or the national federation or the sports ministry. I think I have it in me to repay their faith," she said of the road ahead.

Her mind-boggling achievements, according to Mary Kom, are not a singular effort. She brings in the divine when talking about her team.

"God has been so kind to me and I can't put enough emphasis on 'so' here. I live a gifted life, blessed by that almighty and I am immensely thankful for it. I hope I never become arrogant about it," she said.

"I have seen people change (for the worse) after achieving something big in life. Maybe because I have not changed, god keeps blessing me with more. I don't ever want to be that person who is seen to be arrogant," she added.