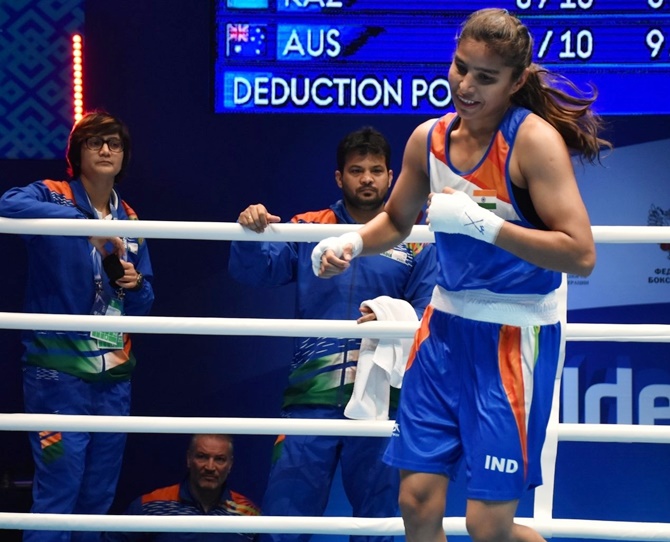 Debutant Manju Rani (48kg) was the lone Indian to enter the final, while six-time champion M C Mary Kom (51kg) and two others signed off with bronze medals in the World Women's Boxing Championships here on Saturday.

Sixth-seeded Rani defeated Thailand's Chuthamat Raksat 4-1. She will take on second-seeded Russian Ekaterina Paltceva in the summit clash on Sunday.

"I had fought this Thai girl earlier too so that experience came in handy. This is the biggest win of my career so far and I am very very happy," Rani said referring to her earlier fight against Raksat. 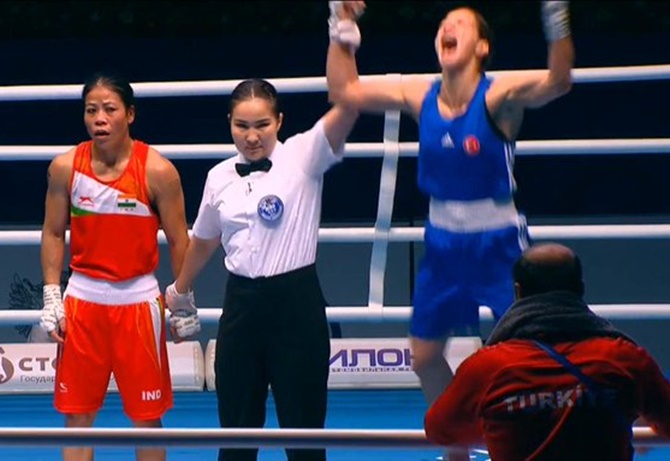 However, Mary Kom, Jamuna Boro (54kg) and Lovlina Borgohain (69kg) settled for bronze medals. In case of Borgohain, it was her second successive third-place finish.

Boro went down 0-5 to top seed and former Asian Games bronze-medallist Huang Hsiao-Wen of Chinese Taipei. Borgohain (69kg) squared off against China's Yang Liu and was beaten 2-3 in a hard-fought bout.

The Indian contingent sought reviews of the decisions in Mary Kom and Borgohain's bouts but the appeals were turned down by the International Boxing Association's (AIBA) technical committee.

"I am very disappointed with the decision. I think I fought much better and did not deserve to lose but I will try to ensure that this setback helps me achieve bigger things," Mary Kom said.

Rani, who hails from Haryana and made the national camp only this year, put up a gutsy show against the more muscular Raksat. Relying on counter-attacks in the first two rounds, the Strandja Memorial silver-medallist went on the offensive in the final three minutes.

She rattled the Thai with her ferocious combination punches, piercing through her shell guard with forceful straight punches.

Mary Kom also fought a tactically sound bout but was edged out by the Turk in a split verdict.

Both the boxers seemed hesitant to make the first move in the opening round but Mary Kom had the edge in the counter-attacks as Cakiroglu struggled to make her height advantage count.

The second round followed a similar pattern as far as tactics went but Cakiroglu seemed the sharper of the two.

In the final three minutes, both the boxers upped the ante but Cakiroglu was dominant aggressor eventually.

"Mary fought exceptionally well and should have won the bout. We are still quite stunned that the decision did not go in her favour," India's assistant coach and Mary Kom's trainer Chhote Lal Yadav said.

Despite the defeat, it was a stupendous campaign for the 36-year-old India boxing legend. This bronze, her first World medal in the 51kg category, only added to her long list of accomplishments.

Boro was up against a much taller rival and although she fought her heart out, the height advantage worked for Huang, who struck some stinging body blow.

"I am happy with the bronze but I think I could have done better. Obviously I made mistakes, that's why I lost. I will go back and make sure those mistakes are not repeated and I do better next time," Boro said after the loss.

Borgohain found a wily opponent Liu. The Chinese boxer had a definitive reach advantage and she made it count with her jabs. Borgohain did well in counter-attacks but Liu claimed the upperhand with her more forcefully-struck punches.