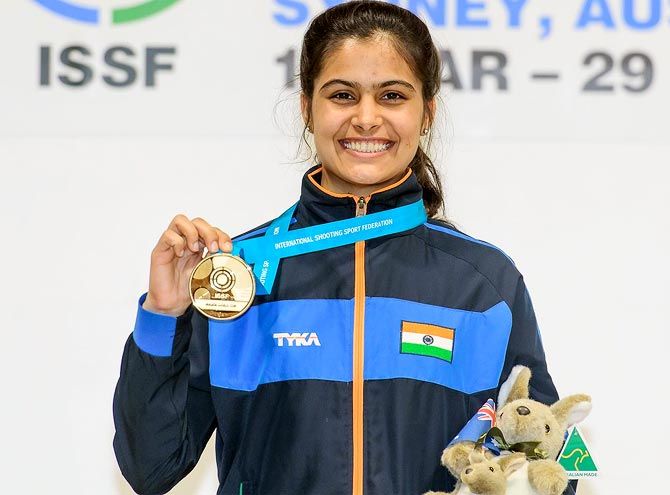 IMAGE: Manu Bhaker had won the gold medal in the women's 10m air pistol event at the ISSF Junior World Cup in Sydney in March this year. Photograph: ISSF/Twitter

Teenage shooting star Manu Bhaker was on Monday named the flag-bearer of the Indian contingent for the 3rd Youth Olympic Games to be held in Buenos Aires from October 6-18.

Indian Olympic Association (IOA) President Narinder Batra made the announcement during the send-off ceremony in New Delhi on Monday.

"It is a great honour for me. I never expected to be the flag-bearer for the Indian contingent," the 16-year-old Manu told PTI.

A contingent of 68 members, including 46 athletes, will depart for Argentina on Tuesday to compete in multi-sport event. India will have representation across 13 disciplines at the event.

Goa Olympic Association Secretary Gurudutta D Bhakta will be the Chef-de-Mission of the contingent.

"It gives me immense pleasure to announce the young athletes' participation in the Youth Olympic Games. May the Indian flag fly high and our athletes bring laurels for the country," Batra said.

The send-off ceremony was also attended by Sports Minister Rajyavardhan Singh Rathore and IOA Secretary General Rajeev Mehta, among others.

"Gone are the days when Indians participated in big multi-sport events just for the sake of participation. I know you all will give your best and bring medals for the country," Rathore said.

This is India's largest ever contingent at the Youth Olympics. Hockey 5s has most number of Indian participants with 18 (nine each in men's and women's team) while track and field has seven athletes. Other Indian participants are: shooting (4), recurve archery (2), badminton (2), swimming (2), table tennis (2), weightlifting (2), wrestling (2), rowing (2), boxing (1), judo (1), sport climbing (1).

Bhaker, who had won gold in 10m air pistol at Guadalajara World Cup as well as Commonwealth Games, will be among top medal contenders for India at the Youth Olympics.

IOA Secretary General Rajeev Mehta said, "Youth Olympics is a good platform for athletes to familiarise with the Olympic values and the Olympic Games environment at an earlier stage. I urge our young team to see the Games as a medium for sporting and cultural exchange whilst giving their best performances."

In the lead up to the Youth Olympics, the IOA also held an interactive preparatory session with sports psychologists, nutritionists and senior journalists for the benefit of the young athletes.