How pursuit of individual glory steered Manju Rani to boxing 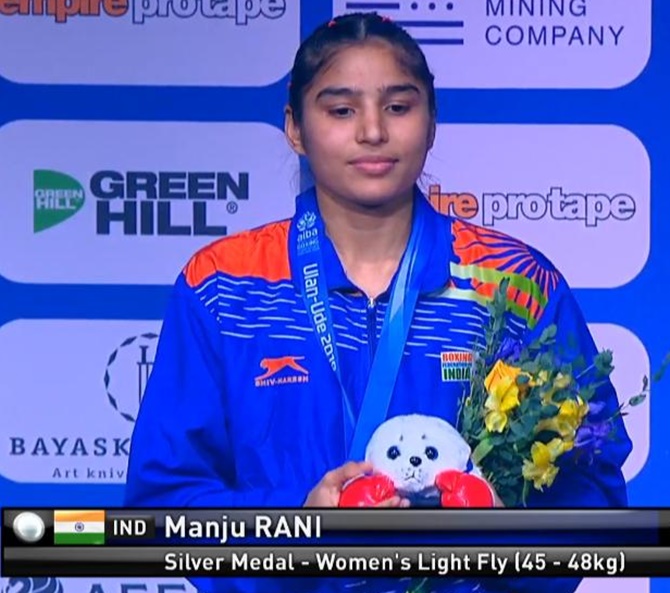 She took to boxing in pursuit of individual glory and Manju Rani got what she wanted in her debut world championship, that too in her maiden year at the top level.

The 19-year-old from Haryana, who represented Punjab in the Nationals after failing to get a break from her own state, was the lone Indian, among four semifinalists, to make the finals of the mega-event in Ulan-Ude, Russia.

She ended her campaign with a light flyweight (48kg) silver medal on Sunday after losing to Russia's Ekaterina Paltceva by a very close margin.

"It's an early birthday present. I turn 20 on Saturday," Rani said in a telephonic interaction.

Hailing from the Rithal village in Rohtak, life was tough for Rani. She lost her father, a BSF man, to cancer in 2010 and was raised, along with four of her other siblings, by her mother Ishwanti Devi.

"I started as a kabaddi player but that's a team sport and credit is shared. Boxing attracted me because it's an individual sport, the glory is all yours alone," she recalled.

"My mother was very supportive of my career choice. She backed me to the hilt," she added.

It also helped that she had Olympic medal winners in Vijender Singh and M C Mary Kom to look up to.

"Vijender bhaiyya and Mary didi have inspired so many and I am one of them. Just looking at what they have achieved makes you want to work harder. I used to watch them and feel good about taking up this sport," she said.

It certainly did inspire her as she entered the world championship as six-time gold-medallist Mary Kom's teammate and even went one better on her. Mary Kom signed off with a bronze on Saturday after going down in the semifinals.

Reflecting on her journey, Rani recalled the contribution made by her uncle Sahab Singh in making her the sprightly, aggressive boxer that she is now.

"Funny thing is he himself didn't know a lot. So just to teach me, he would go and learn things himself and then ensure that I learnt them. But it was thoroughly enjoyable to learn the sport," she said.

Once the learning was done, next step was getting a breakthrough and after failing to get that with Haryana, she made the decision to explore elsewhere.

"I took admission in a University in Punjab and began competing. Eventually I made it to the state team and won the Nationals to come into the camp this year in January," she said.

There was no looking back from that point onwards, Rani claimed a silver medal at one of Europe's oldest and most competitive tournaments -- the Strandja Memorial earlier this year.

And now she has claimed the biggest medal of her nascent career, one that holds promise for even bigger achievements in the time to come.