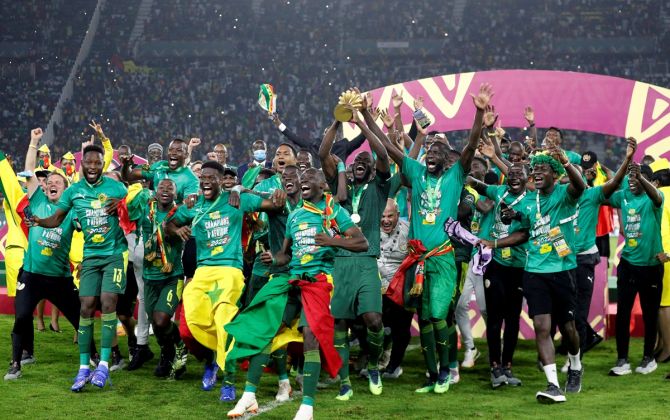 Sadio Mane showed bravery and mental strength in putting behind him an early squandered penalty to power Senegal to their first African title and bring to an exciting close a troubled tournament in Cameroon.

Mane had a seventh minute penalty saved in Sunday’s final against Egypt at the Olembe Stadium in Yaounde, a missed opportunity that could have proven costly as the game continued through extra time to a penalty shootout after a goalless stalemate.

But he put the trauma behind him to step up and take the decisive kick in the post-match shootout to see his country to a 4-2 win on penalties.

It was as much as Senegal deserved as they dominated the final, living up to their pre-tournament billing as favourites and confirming their ranking as the continent’s top team.

It was a first Cup of Nations success for the West African country after two lost finals in 2002 and 2019.

Senegal were barely tested in the tournament, bizarrely scoring a single goal in the group stage - a last-minute Mane penalty in their opening game against Zimbabwe - and yet finishing top of their group.

They then overcame the Cape Verde Islands, Equatorial Guinea and Burkina Faso to get to the final, while Egypt had a particularly tough run.

They went into extra time in each of their knockout rounds, two of them won on post-match penalties.

Their fatigue going into the final was all too evident, exacerbated by another match that went on past the 90-minute mark.

It is the second tournament in three editions that Egypt have finished runners-up, the defeat in Sunday’s final reducing captain Mohamed Salah to tears.

The 33rd edition of Africa’s favoured sports event will be most remembered, however, for the deadly stadium crush when Cameroon meet the Comoros Islands in the second round, with eight killed and seven seriously injured amid lax security.

Eyewitnesses reported police standing by as spectators rushed to try and push into the Olembe stadium, which was closed for one match thereafter while the Confederation of African Football sought guarantees of better security from local authorities.

CAF struggled to keep organisation of the event on track, postponing it in 2019 when Cameroon was found to be not ready and replaced as hosts by Egypt.

Even with a further 12-month postponement from 2021 because of the COVID-19 pandemic, there was a rush to complete works and further discussions over whether to cancel the event.

It went ahead after Cameroon government guarantees but CFA found pitches in poor condition and general organisation tardy. The event was hit further by coronavirus outbreaks among most of the teams, as well as onerous conditions on spectators which brought poor attendance.

The next Africa Cup of Nations will be hosted in the Ivory Coast in mid-2023.