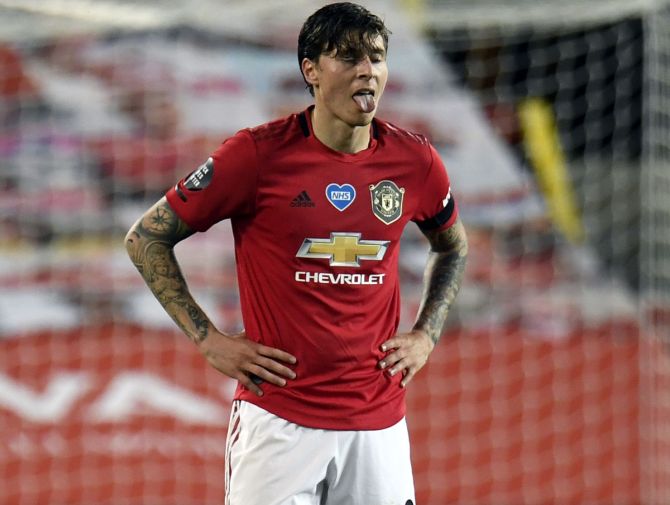 IMAGE: Manchester United defender Victor Lindelof chased and caught the man before handing him over to the authorities. Photograph: Peter Powell/Pool via Getty Images

Manchester United defender Victor Lindelof made a timely intervention by chasing down a man who stole an elderly woman's handbag in his home city of Vasteras on Monday, Swedish newspaper Aftonbladet reported.

A police statement said the suspect snatched the handbag as he cycled past the woman, who is in her 90's. Aftonbladet reported that Lindelof chased and caught the man before handing him over to the authorities.

"A man who was in the vicinity is said to have run after the suspected perpetrator, caught up with him and held him until the police arrived at the scene," the police said without naming the 26-year-old Lindelof.

"The police would like to take this opportunity to thank the witness for a quick and sensible intervention to restore the plaintiff's property."

Manchester United were not immediately available for comment when contacted by Reuters but British media said the club had confirmed the Aftonbladet report.

Lindelof, who joined United from Portuguese side Benfica in 2017, started 35 Premier League games in the 2019-20 season as they finished third.