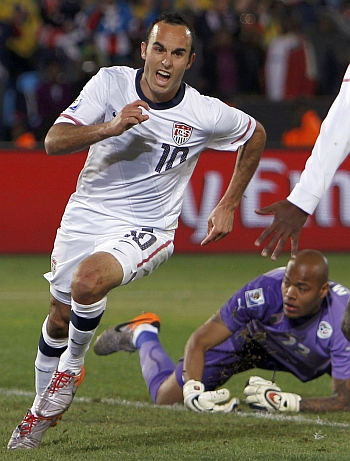 Manchester City have spent the off-season beefing up their squad before the start of the English Premier League and Mancini said Donovan might also be on the shopping list.

"Landon Donovan is a good player. It's possible," he told a news conference in New Jersey where Manchester City are preparing for the New York Challenge, starting Thursday.

Donovan, 28, is currently under contract to the Los Angeles Galaxy of US Major League Soccer but was loaned to Everton last season. MLS officials have said they hope Donovan will remain at home.

Mancini also confirmed City were looking at Inter forward Mario Balotelli and Aston Villa midfielder James Milner but had not yet reached any agreements.

The four-team New York Challenge starts on Thursday when Tottenham play the New York Red Bulls, whose latest signing, Frenchman Thierry Henry, will play his first match for the club.

Manchester City play Portugal's Sporting Lisbon on Friday before the competition finishes with a double-header on Sunday.