Coronavirus outbreak has brought elite-level sport to a standstill and sparked fears that the 2020 Olympics may have to be postponed or cancelled. IMAGE: India's shooter Miraz Ahmad Khan says he would ignore the risks to have a shot at Olympic gold. Photograph: Atul Yadav/PTI

Indian shooter Mairaj Ahmad Khan and javelin thrower Shivpal Singh say competing at this summer's Tokyo Olympics is their top priority despite concerns about the health risks to athletes from the coronavirus outbreak.

The number of coronavirus infections in Japan rose to 1,484 on Sunday, increasing by a faster pace than the previous day, public broadcaster NHK reported. More than 150,000 people have been infected around the world and 5,800 have died, according to a Reuters tally.

The outbreak has brought elite-level sport to a standstill and sparked fears that the 2020 Olympics may have to be postponed or cancelled.

However, skeet shooter Khan says he would ignore the risks to have a shot at Olympic gold.

"If the Olympics were to be held now, despite the health risk that the coronavirus poses, I would go and compete without even thinking about the consequences," Khan told Sunday's edition of the Indian Express newspaper.

Japanese Prime Minister Shinzo Abe said on Saturday the country was still preparing to host the Olympics while Tokyo Governor Yuriko Koike vowed to take thorough measures against the outbreak. 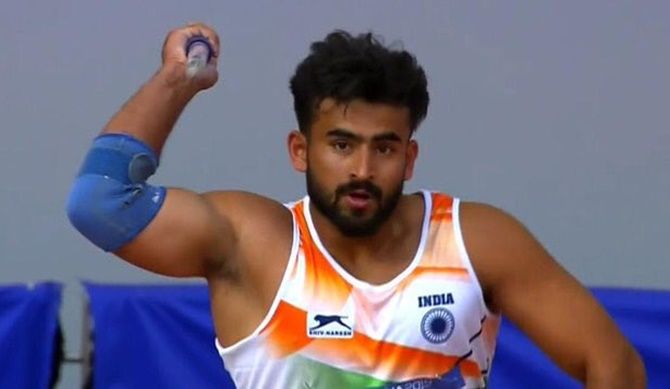 IMAGE: Shivpal Singh says athletes are trained to get over setbacks but missing out on the Olympics would be on another level. Photograph: World Military Games/Twitter

There has also been suggestions that the Games could take place without spectators.

"Personally, I don't mind that," said Khan, who earned his spot at the Olympics by winning a silver medal at the Asian Championship in Doha last year.

"My dream is to win an Olympic medal and ultimately you will be called an Olympic champion; no one will bother or care to remember if it was behind closed doors."

Singh, who booked his Tokyo ticket at a meet in South Africa on Tuesday, says athletes are trained to get over setbacks but missing out on the Olympics would be on another level.

"... athletes are taught to brush off disappointments and move forward. But this is not just another tournament," the 24-yer-old told the newspaper.

"I will definitely pack my bags for Tokyo if the event happens, whether risky or not."

"It's a dream for every athlete to be at the biggest sporting stage in the world. It's my desire to do well at the Games and until then I won't rest in peace."