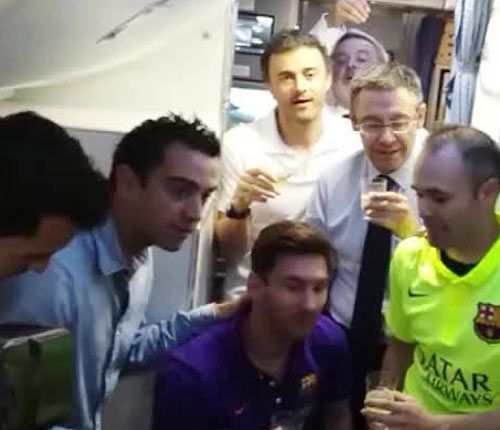 The enduring image of Luis Enrique for many soccer fans is the Spain player with blood gushing from his nose after a vicious elbow from Italy defender Mauro Tassotti during the 1994 World Cup quarter-final in Boston.

- How Barca won La Liga... straight from the horse's mouth!

That could now be replaced by a picture of the beaming Barcelona coach hoisting aloft the La Liga trophy, which they wrapped up with a 1-0 win at Atletico Madrid on Sunday, the first of a possible treble of titles in his first season in charge at the Nou Camp.

Few would have predicted the former Barca and Spain midfielder, 45, could even come close to matching the historic achievement of his ex-team mate Pep Guardiola during his debut campaign in 2008-09. 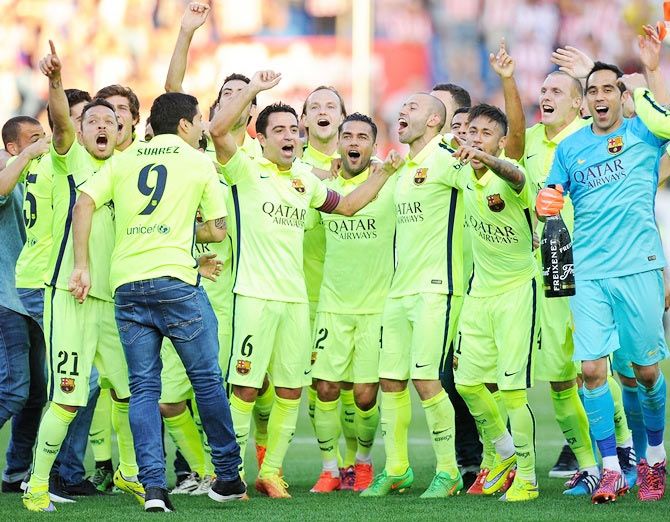 The Catalan giants became the first Spanish club to win the Champions League and the domestic league and Cup in one season, something no other side, including their arch rivals Real Madrid, have managed.

Barca are through to the final of the latest edition of Europe's elite club competition to play Juventus, when they will be chasing a fifth continental crown, having eliminated Guardiola's Bayern Munich 5-3 on aggregate in the semi-finals.

Before the final in Berlin on June 6, they can secure a record-extending 27th King's Cup when they play Athletic Bilbao in the showpiece at the Nou Camp on May 30. 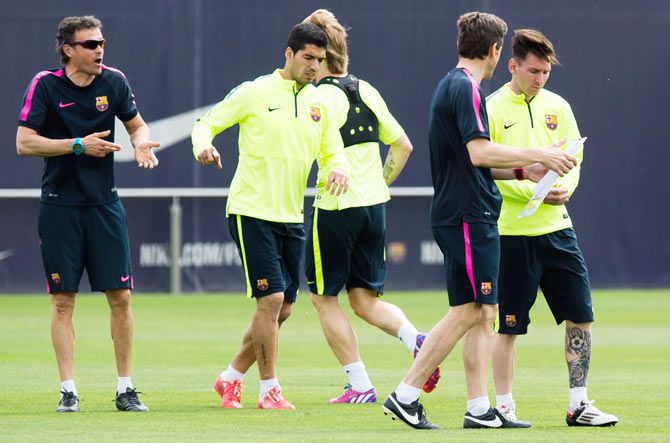 The club's bold decision to repeat the Guardiola gamble with Enrique has proved a resounding success, whatever else happens between now and the end of the season.

He took over from Gerardo Martino after Barca ended 2013-14 without a major trophy for the first time in six years and the Argentine was pushed out.

Enrique has a similar trajectory to Guardiola, taking over as Barca B team coach when his former teammate was promoted to take charge of the first team.

A club legend and home-grown talent, Guardiola is a Catalan hero, while Luis Enrique hails from Gijon in the region of Asturias and also had a stint at Real before joining Barca.

That meant he had to work hard on the pitch to win over the Barca fans and he has had to do the same as a coach on the sidelines in one of the most high-pressure jobs in the game. 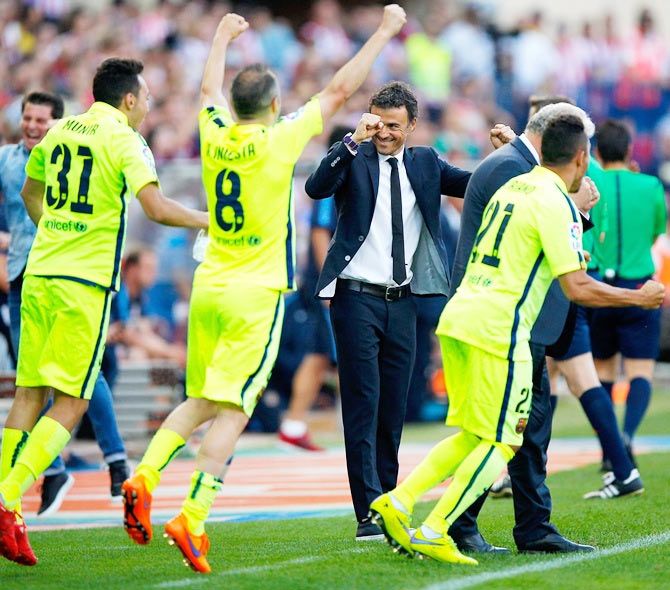 As a player, he won plaudits for his battling spirit, athleticism and a keen eye for goal.

After a successful stint with Barca B, his coaching career faltered at Serie A side AS Roma before he led modest Celta Vigo to an impressive ninth place in La Liga last term.

His no-nonsense character has at times soured his dealings with the media and his efforts to stamp his authority on the team led to a clash with club talisman Lionel Messi around the turn of the year.

That was all forgotten as the players and coaching staff celebrated Sunday's triumph on the pitch at the Calderon.

It was fitting that Barca sealed a fifth La Liga crown in seven years at the home of the defending champions, who pipped them to the title with a draw at the Nou Camp on the final day of the 2013-14 campaign.

© Copyright 2020 Reuters Limited. All rights reserved. Republication or redistribution of Reuters content, including by framing or similar means, is expressly prohibited without the prior written consent of Reuters. Reuters shall not be liable for any errors or delays in the content, or for any actions taken in reliance thereon.
Related News: Barca won La Liga, Luis Enrique, Barca B, Pep Guardiola, FC Barcelona
SHARE THIS STORYCOMMENT
Print this article