India's Lovepreet Singh won a bronze in men's 109 kg to continue the country's medal rush in weightlifting at the Commonwealth Games in Birmingham on Wednesday.

The 24-year-old son of a tailor from Amritsar lifted a personal best of 355 kg, including a new national record of 192 kg in clean and jerk, to finish third on the podium.

A steady Lovepreet improved from 157kg to 163kg in his final attempt of snatch to be joint second with Canadian Pierre-Alexandre Bessette. However, the intense competition got the better of him in the clean and jerk, as he slipped to third position.

"I could not have been happier. This was my first big competition at the International stage and I produced my best ever show to return with a medal," said the former Commonwealth junior champion.

Junior Nyabeyeu of Cameroon claimed the gold medal with a total lift of 361 kg, while Jack Opeloge of Samoa bagged the silver by lifting 358 kg in the event. 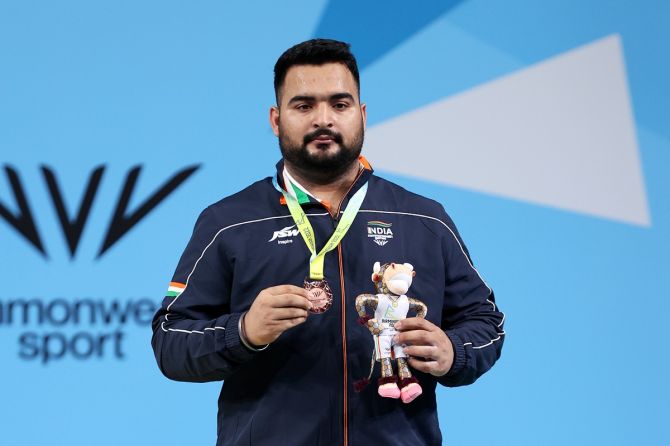 Lovepreet could have joined his father's business, but his family wanted to make him a sportsperson, and his journey began at the age of 13 by training at the DAV Ground.

"Like every other athlete I too faced a lot of hardships, including financial constraints, but my parents ensured that I kept going."

Life changed after the heavyweight lifter joined Indian Navy in 2015, and then moved to the national camp at Patiala.

In his maiden CWG, he had successful lifts in all his attempts in both snatch and clean-jerk, displaying his composure.

"This was my first major competition so obviously I was under pressure. But nerves settled after my first lift as I gradually kept on improving," he said.

Asked about missing the silver by three kilograms, he said: "I fought for it but the competition was tough. This has been my best ever show so I couldn't have been happier."

Like Vikas Thakur, Lovepreet also did the 'thigh-five' celebration to pay tribute to the late Punjabi singer Sidhu Moose Wala, with his songs playing in the background.

Next target is National Games

"We have National Games next and the next major competition is the Asian Games, but I don't have a category there. They have a weight category of 102kg there, so we will take a call," the lifter said.
"This medal is dedicated to all my coaches, family, parents and fellow countrymen," he added.

India have so far won nine medals in the weightlifting arena at the National Exhibition Centre, including three gold, to lead standings in the discipline. They have two more events lined up. PTI TAP