Jerry Buss, who parlayed a $1,000 real estate investment into ownership of the Los Angeles Lakers, winning 10 National Basketball Association championships and making the team one of the most glamorous in American sports, died on Monday at 80, the team said on its official website.

Buss, who matched superstar players with brilliant coaches and savvy executives, had been hospitalized recently for cancer. The official cause of death was kidney failure, said Lakers spokesman John Black.

Buss had been hospitalized much of the past 18 months and had not been to a Lakers game this season. 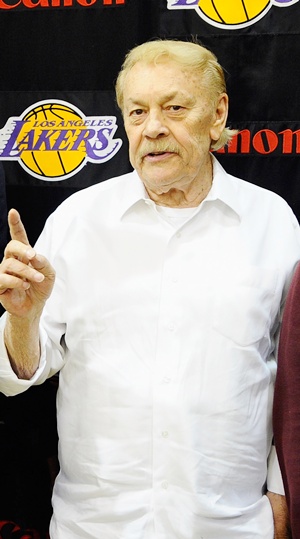 "We not only have lost our cherished father but a beloved man of our community and a person respected by the world basketball community," a statement released on behalf of the Buss family said.

NBA Commissioner David Stern said the NBA had "lost a visionary owner whose influence on our league is incalculable and will be felt for decades to come."

Buss bought the Lakers in 1979 and under his ownership they became the second most valuable professional basketball team behind the New York Knicks, worth an estimated $1 billion, according to Forbes magazine.

They won league championships during their "Showtime" era in 1980s and early '90s with teams that feature some of the game's marquee names, including Kareem Abdul-Jabbar and Magic Johnson. The team had more dominant years in the late 1990s through 2004 with superstars Kobe Bryant and Shaquille O'Neal.

In addition to winning championships with all-star players, the flashy Showtime teams transcended sport. Live music, dancers and a festive atmosphere made the games like a party and celebrities such as Jack Nicholson, Leonardo DiCaprio, Dyan Cannon and Denzel Washington were regulars.

"The brand of basketball that he brought here with Showtime and the impact that he had on the sport as a whole - those vibrations were felt (by) a kid all the way to Italy at 6 years old before basketball was even global," Bryant, who was raised in Italy, told the Los Angeles Times.

Two of Buss' adult children are executive vice presidents of the franchise - Jeanie Buss manages the business and Jim Buss oversees basketball operations. He had four other childen.

"I've worked hard and been lucky," Buss told the Los Angeles Times. "With the combination of the two, I've accomplished everything I ever set out to do."

Buss also was a high-stakes poker player and finished third in the 1991 World Series of Poker and second in the 2003 World Poker Tour's Freeroll International. He also appeared on NBC's Poker After Dark.

Gerald Hatten Buss was born in Salt Lake City in 1933 and worked his way through the University of Wyoming, graduating in three years. In 1957, he earned a doctorate in chemistry at age 24 from the University of Southern California, where he briefly taught.

Buss made a fortune after investing $1,000 with a fellow chemist in a small Los Angeles apartment building to provide him added income so he could teach. His holdings grew, leading the way for his founding the successful real estate investment company Mariani-Buss Associates with long-time business associate Frank Mariani.

In 1979, Buss bought the Lakers, the Los Angeles Kings hockey team and the Los Angeles Forum arena in a $67.5 million deal that at the time was the largest transaction in sports history. Buss later sold the Kings.

He bought PickfairMansion in Beverly Hills in 1979, paying $5.4 million for the former home of movie legends Douglas Fairbanks and Mary Pickford. He sold the home in 1988 for $6.7 million.

James Worthy, a key player during the Showtime era, offered condolences to the Buss family on Twitter.

"Dr. Buss was not only the greatest sports owner, but a true friend and just a really cool guy. Loved him dearly," Worthy said.

Mark Cuban, owner of the rival Dallas Mavericks, tweeted: "Your encouragement and support along with your stories of staying true to yourself had an enormous impact on me."