Lords of the Ring: 6 Indians in Asian Boxing finals 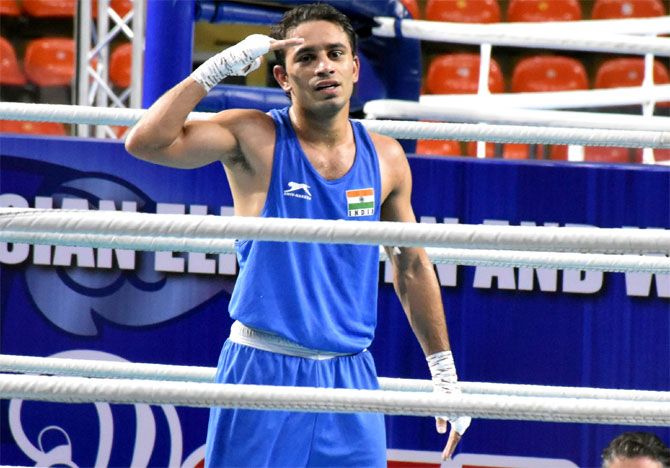 IMAGE: Amit Panghal celebrates after winning the semi-finals of the men's 52kg event at the Asian Boxing Championships, in Bangkok.

Amit Panghal (52kg) and Kavinder Singh Bisht (56kg) remained on course for their second successive international gold medals this year and India looked good to notch its best-ever performance in the Asian Boxing Championships, in Bangkok, on Thursday.

Panghal and Bisht were the most impressive on a day when Shiva Thapa's (60kg) unprecedented fourth successive semi-final appearance ended with a bronze after a gruelling battle which could have gone either way.

Panghal defeated China's Hu Jianguan in a split verdict, which was a surprise, given that the Indian was clearly the more dominant of the two boxers and dictated the bout with tremendous pace and aggression. IMAGE: Ashish Kumar, left, celebrates after winning the semi-finals of the men's 75kg event at the Asian Boxing Championships, in Bangkok.

Bisht, on the other hand, turned in a lion-hearted show in a bloody battle which left him and his opponent -- Mongolian Enkh-Amar Khakhuu -- with bandaged right eyes. The draining fight ended 3-2 in the Indian's favour.

Thapa came out all guns blazing too, against 2015 edition's silver-medallist Kazakhstan's Zakir Safiullin, but a loss of momentum in the final round ended up tilting the scales against him in a split decision by the judges.

Also finishing with a bronze among men were Ashish (69kg) and Satish Kumar (+91kg).

While Ashish was beaten 0-5 by Uzbekistan's Bobo-Usmon Baturov, Satish was forced to give a walkover to Kazakh Kamshybek Kunkabayev owing to an injury sustained in the previous bout.

It was a positive start to the day for India with national champion Deepak advancing to the final without exchanging a single blow after getting a walkover from Kazakhstan's Temirtas Zhussupov due to injury. It was a second successive walkover to the Indian.

Next up was Bisht, who had upstaged reigning World champion Kairat Yeraliyev of Kazakhstan in his quarter-final contest. IMAGE: Kavinder Singh Bisht in action in the men's 52kg event at the Asian Boxing Championships, in Bangkok.

Willing to risk a few blows, the quick-moving Bisht stunned his rival by the sheer power of his punches. The intensity was high in the final three minutes and Khakhuu did try hard but even his best was not enough to deter Bisht, who seemed prepared for a late onslaught of punches.

Another high-voltage bout followed with Ashish fighting it out against Iran's Seyedshahin Mousavi. The Indian was slow off the blocks against the sprightly Iranian, who clearly had the early momentum.

But Ashish raised the bar in the second and third rounds to counter Mousavi with some precisely-placed hooks and straights.

Among the women, Manisha lost to Taiwan's Huang Hsiao-Wen, while Sarita (60kg) went down to China's Yang Wenlu.

Pooja was up against Kazakhstan's Fariza Sholtay and emerged triumphant in a unanimous decision.

In the evening session, Zareen gave it her all in the clash against Vietnam's Nguyen Thi Tam but signed off with a bronze after losing the bout on a split verdict by the judges.

Sonia was squared off against local favourite Nilwan Techasuep and although the Indian seemed to be a more precise puncher than her rival, the judges ruled in the Tha's favour much to the crowd's delight.

In the last Indian bout of the day, National champion Simranjit faced a rather sluggish opponent in Uzbekistan's Maftunakhon Melieva and controlled the proceedings from start to finish a 5-0 winner. 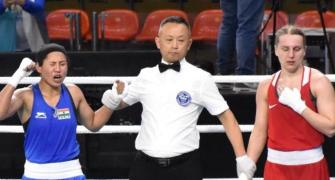 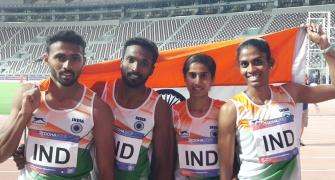 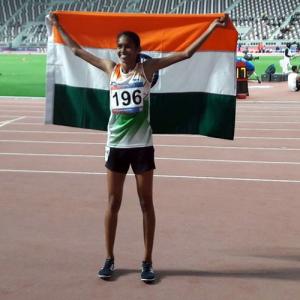