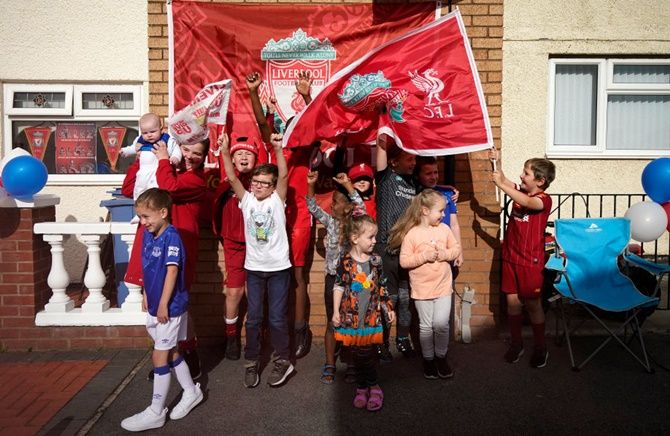 When Liverpool finally get their hands on the league title again after a 30-year wait, the COVID-19 crisis has ensured the celebrations are going to look a lot different to the joyous scenes that greeted their last success.

Regardless of whether they eventually win it at home or away, the celebrations that marked their Anfield victory over Queens Park Rangers that won the league in 1990 will not be repeated.

With games currently taking place behind closed doors and large gatherings prohibited, fans will have to find novel ways of marking the occasion.

“For many of us, this has been a party that has been three decades in the making, so everyone has their own idea of what they plan to do,” Liverpool fan and co-founder of The Anfield Wrap podcast Gareth Roberts told Reuters.

“There’s another lad who said he just wants to sit in a tree and watch the world go by with Liverpool as champions!” he added. 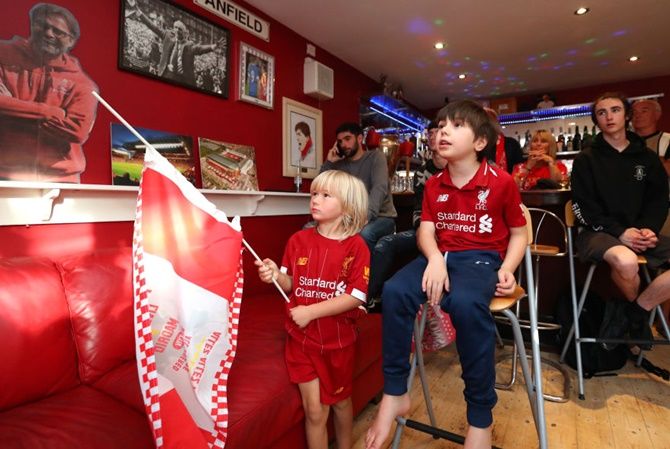 IMAGE: A family of Liverpool supporters called the 'Westies' are seen at their home as they are all watching the Merseyside derby in ‘Westies Bar’ in the bottom of their garden during the Premier League match between Everton FC and Liverpool FC. Photograph: Alex Livesey/Getty Images

Liverpool hold a 20-point lead over second-placed Manchester City with eight games of the campaign remaining.

If they beat Crystal Palace at home on Wednesday, they could wrap up the title as early as Thursday, providing City drop points at Chelsea.

Roberts said that fans all over the world have been in touch with him to talk about how they will toast the team when the long title drought ends.

Among the fans eager to celebrate is Sweden’s ex-Liverpool defender Glenn Hysen, who played in the last league-winning Reds team.

He had planned to be in England in his capacity as ambassador for Sweden’s Liverpool fans, but those plans were scuppered by travel restrictions due to the virus.

Instead, he and his fellow Swedish Liverpool fans will get together in the city of Gothenburg where he now lives to watch the remaining matches.

“We have booked a beer-tasting the night Liverpool play City, so hopefully they can win it then,” the jovial 60-year-old told Reuters with a laugh.