Former national champion Poulomi Ghatak also could not qualify for the Olympics after a 2-4 loss in the second round on Friday.

After a brilliant first round, Sharath and Amalraj drew a blank in the second round to crash out of the final Olympic qualifier. They needed to at least reach the quarter-finals to qualify for the Games.

The 2006 Commonwealth Games gold medallist, Sharath lost 1-4 to lower-ranked Wang Yang of Slovakia to see his hopes of making it to his third successive Olympics go up in smoke. 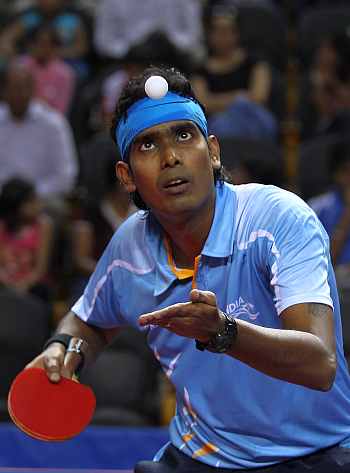 In other match of the day, Amalraj, who showed great promise by defeating second seed Emmanuel Lebesson of France in the first round, went down to Latvia's Matiss Burgis without posing much of a fight. The Indian lost 4-11, 7-11, 8-11, 6-11 in lop sided encounter.

In the women's section, Poulomi went down fighting to Taipei's Chia-Hui Lin in a 2-4 marathon on Friday.

The Indian paddler displayed some great fighting spirit as she came back from behind to level the scores before succumbing to 244th ranked Lin.

But that did not prove enough as Lin won the following games 11-8, 11-4 to seize the initiative.

Earlier Kumaresan Shamini failed to advance to the second stage after she lost to Joanna Parker of England to finish at the third spot in her group.