The Queen arrived at the opening ceremony of the Olympics in spectacular style on Friday, greeted by a huge roar from the crowd as she appeared in the stadium to help officially open the London Games.

In the film, the two were seen entering a helicopter, which swept off over the capital. Minutes later a helicopter appeared above the stadium and released two people who parachuted just past the stadium. 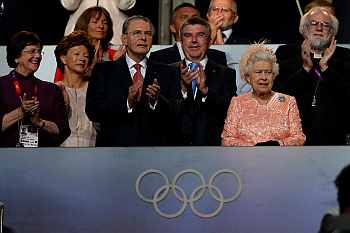 The Queen then walked into the opening ceremony in east London, before the 60,000 strong audience, and before a choir sang the national anthem.

Britain's Queen is enjoying her highest level of public popularity in 20 years following the celebration of her Diamond Jubilee this year and the royal family is expected to take a high-profile role during the Games.

Some 1 billion people were expected to watch the opening ceremony around the world, which will launch the 17 days of sport.

© Copyright 2021 Reuters Limited. All rights reserved. Republication or redistribution of Reuters content, including by framing or similar means, is expressly prohibited without the prior written consent of Reuters. Reuters shall not be liable for any errors or delays in the content, or for any actions taken in reliance thereon.
Related News: London, James Bond, Daniel Craig, Zara Phillips, Getty Images
SHARE THIS STORYCOMMENT
Print this article