Olympic-bound paddlers, Soumyajit Ghosh and Ankita Das, will spearhead Indian challenge in men's and women's competitions respectively at the Swedish Open to be held at Helsingborg between June 7 and 12 and the Brazil Open at Santos from June 13 to 17.

Both Soumyajit and Ankita, along with 13 others, will be accompanied by foreign coach Leszek Kucharski and national coach Bhawani Mukherji.

The two back-to-back championships, the first one part of Euro-African circuit and the second an ITTF world tour meet, have come as godsend opportunities for all the players, especially the two, who have qualified for the London Games next month.

These are the only two meets where both Soumyajit and Ankita will be able to compete and assess themselves before the Games. But for the rest, the two championships will help them improve their world rankings, if not at least gain vital points to keep their rankings in check.

Dhanraj Choudhary, TTFI secretary-general, said the two events were important for the Olympic-bound paddlers as that would give them adequate exposure before the Games.

All the team members will be returning on June 20 and the TTFI is planning a special camp for both Soumyajit and Ankita either at Patiala or in China, added Choudhary. 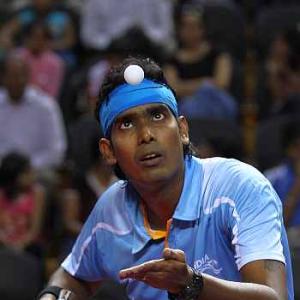