India's Krishna Poonia finished seventh in the women's discus throw at the London Olympics after a below-par performance on Saturday.

The Commonwealth Games gold medallist's best effort was a clearance of 63.62 metres, well below her personal best of 64.76m, also a national record.

She cleared 62.42m in her first attempt, which was enough for her to make it to the top eight. 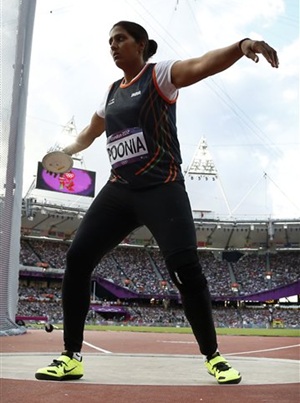 She then fouled in the second attempt and came up with a 61.61m clearance in the third.

Out of the 12 finalists, four were eliminated after three attempts and Poonia was seventh at that stage. She again fouled with her fourth throw before coming up with 63.62m in her fifth and 61.31m in her sixth and last attempts.

European champion Sandra Perkovic of Croatia won the gold with a throw of 69.11m while the silver and bronze went to Darya Pishchalnikova (67.56m) of Russia and reigning World champion Li Yanfeng (67.22m) of China respectively.

2008 Beijing Olympics gold winner Stephanie Brown Trafton of the United States finished eighth, behind Poonia, with a throw of 63.01m.

Poonia is only the sixth Indian to make it to the final round in track and field at the Olympics, after Milkha Singh, P T Usha, S Sriram, Gurbachan Singh Randhawa and Anju Bobby George.