India crashed to their fourth successive defeat in the men's Olympic hockey competition, thrashed 4-1 by South Korea on Sunday.

India is the only team among 12 competing at these Games without a point from four matches.

The eight-time gold medallists are now heading for their lowest-ever finish in the Olympics, as they will place at the bottom of the group and have to play for 11th and 12th positions.

Meanwhile, captain Sohail Abbas and Waseem Ahmad scored late goals to give Pakistan a 5-4 victory over South Africa. The victory moved Pakistan into third place in its group, level with Australia and Britain, who play each other later Sunday.

Teun de Nooijer marked his 450th match for the Netherlands by scoring in the 36th minute to give the Dutch a 3-1 win over Germany. The Netherlands came back from an early deficit -- German forward Christopher Zeller scored in the third minute from a penalty-corner. Bob de Voogd and Mink van der Weerden got the other Dutch goals.

The result means the Netherlands are the first team to qualify for the medal round. 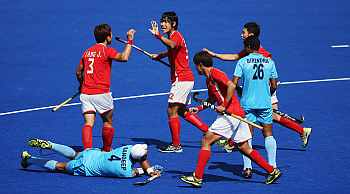 India's defence showed some resolve to hold on grimly against the fast-paced Koreans, but it crumbled thrice on well-directed penalty-corner shots.

Indian coordinated better than in their earlier matches, but their goal fell twice in the last four minutes.

The sustained pressure built by the Koreans midway through the first session was an indication of things to follow as India seemed desperate and fell back to defend. However, they had no mechanism to stop Nam Hyun Woo from converting two penalty-corners, in the 59th and 70th minutes, which shattered hopes of salvaging some pride.

India found the equaliser in the 10th minute on a breakaway move, with Gurwinder Singh Chandi deflecting home Gurbaz Singh's cross from the right.

Tushar Khandkar had an opening to put India ahead four minutes later, when he picked a diagonal ball from Dharamvir Singh inside the striking circle, but shot straight into the goalkeeper's pads.

It began raining heavily midway through the session and during this period the South Koreans pushed the Indian defence against the wall.

The Indian defence was rattled when the Koreans broke in from the left with short passes and then forced two penalty-corners in three minutes, but Jang shot wide on both occasions.

Three Indian strikers were in the circle with the ball in a counter attack in the 27th minute, but the Korean defenders covered them well and did not allow a good crack at the goal.

India earned their first penalty-corner in the 31st minute, but Sandeep Singh could not take a shot as the ball was no stopped. Sardar Singh, though, innovated to have a shy with a reverse hit that went wide.

Sandeep was not able to make any impression on the Korean defence even as India earned two successive penalty-corners just before the breather.

The Koreans came back strongly in the second session, but the Indian defence held on grimly by crowding the circle.

India had a chance to move ahead against the run of play in the 57th minute when S V Sunil's shot from left went across the goalmouth and Dharamvir was unable to trap the ball.

Nam scored twice with his penalty-corner drag flicks, giving South a 2-1 lead in the 59th minute by placing a drag-flick into the top corner of the goal.

India then came out of their shell seeking an equaliser, but a counter attack saw captain Lee Seung Il shoot home from the top of the circle to put it beyond India.

The Koreans were not done yet and Nam rubbed salt into India's wounds with a low penalty-corner flick in the last minute to complete India's humiliation.