India had a relatively fruitful day on the tennis courts of Wimbledon, with the warring duo of Leander Paes and Mahesh Bhupathi advancing to the second round of the men's doubles with their respective partners, even as the country's singles challenge ended at the London Olympics with the defeat of Vishnu Vardhan.

While Bhupathi and Rohan Bopanna had to sweat it out before suppressing the challenge of Max Mirnyi and Alexander Bury of Belarus 7-6(4), 6-7(4), 8-6, Paes and his unheralded partner Vardhan got the better of Jean Julien Rojer and Robin Haase of The Netherlands 7-6(1), 4-6, 6-2.

Paes-Vardhan, ranked 208 in the world, struggled to win the first set and lost their rhythm in the second. But they bounced back brilliantly in decider to clinch the issue and keep their hopes alive.

They will now take on Michael Llodra and Jo-Wilfried Tsonga of France in the second round.

Bhupathi-Bopanna, whose insistence to play together sparked off a selection row in the build-up to the Olympics, staved off a spirited challenge from their Belarus opponents to script a gruelling three-set victory after for two hours and 26 minutes.

The pair, who both refused to play with Paes, was stretched to the limit and had to dig deep into their reserves to edge past the gritty Belarusian combination.

After the first two sets went to tie-breakers, the Indian team got the crucial break in the 13th game of the decisive third set and then served out the match in the next game.

They next meet the French combination of Julien Benneteau and Richard Gasquet.

Earlier, 304-ranked Vardhan fought hard but could not make the most of the lucky opportunity he got to compete in the singles and lost 3-6, 2-6 to world No 77 Blaz Kavcic.

He had made it to the men's singles draw after Germany's Philipp Kohlschreiber withdrew due to a right hamstring injury. 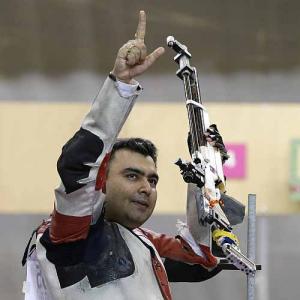 PHOTOS: India's highs and lows on Day 3 of the Games