India coach Pullella Gopichand on Wednesday accused Japanese badminton pair Mizuki Fujii and Reika Kakiiwa of "wanting to lose" their group match after his women's doubles team Jwala Gutta and Ashwini Ponnappa failed to qualify for the knockout stage in Group B amid allegations of match-throwing, at the London 2012 Olympic Games.

Gopichand said he has raised the matter with the Badminton World Federation (BWF), who have so far indicated that no action will be taken against the Japanese pair.

India's complaint was made before the BWF announced the expulsion from the event of the China's doubles world champions Wang Xiaoli and Yu Yang out, South Korean pairs Jung Kyung-eun and Kim Ha-na and Ha Jung-eun and Kim Min-jung, Indonesia's Greysia Polii and Meiliana Jauhari

Gopichand further added that the match-throwing does not stop there.

He claims that once China lost to Denmark in group D on Tuesday morning, Japan "wanted to be second" in group B.

The No.4 seeds Mizuki Fujii and Reika Kakiiwa went down 21-19, 21-11 to the unseeded Cheng Wen Hsing and Chien Yu Chin of Chinese Taipei at the start of the afternoon session, and despite Gutta-Ponnappa winning against the Chinese Taipei pair and Singapore, the Indians failed to qualify.

"In group B, (Chinese) Taipei had to and wanted to win, but Japan wanted to lose to be second in the group to avoid China," Gopichand said.

"We put in an appeal protest this morning and the BWF has come back saying they didn't find any bias or anything beyond the ordinary in the matches. We've filed an appeal to review that decision. 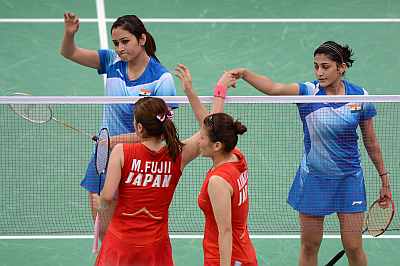 Meanwhile, Gutta also called for the Japanese pair to be disqualified.

"I'm proud to have played in right spirit..the guilty should be punished. Match fixing in #olympics is really disappointing. Hoping for the best," Gutta wrote on Twitter.

In the evening session on Tuesday, the group A and group C women's doubles matches involving Korea, China and Indonesia were met with howls of derision from the Wembley Arena crowd after none of the eight players involved appeared to exert themselves, with serves hit into the net and routine smashes sent wide. All four pairs have now been kicked out of London 2012.

"Only because the crowd made a noise and it was so obvious (in the China/Korea and Korea/Indonesia matches) has the BWF done something," Gopichand said.

"To put it in perspective, the system is first at fault. The players will do whatever they can to win a medal and if losing means a better draw. they will do it. But the first blame lies on the system."

Gopichand said his wards Gutta and Ponnappa are upset at the way the round-robin system has played out.

"It's something you worked for over many years, to do your best, and you can't qualify because somebody else decides to tank their match," Gopichand claimed. "The (round-robin) system needs to be repealed."

A statement released by the BWF said the Indonesian and Korean teams have appealed the decision to disqualify them.