Will you promise you will wear bikinis even if it rains?

That was the first question to Britain's women Olympic beach volleyball players at a pre-Games news conference on Thursday, giving a flavour of how the sport is perceived.

"We can't promise anything with the weather," said one of the players, Zara Dampney, deftly trying to evade the question with a typically British digression on the subject of rain.

This did not satisfy the male reporter from the Sun, Britain's most-read newspaper, who pleaded a second time with the pair to promise they would not cover up.

"Obviously if it's cold then we'll have to cover up but if the sun comes out then we'll be able to be in our bikinis," said Dampney. 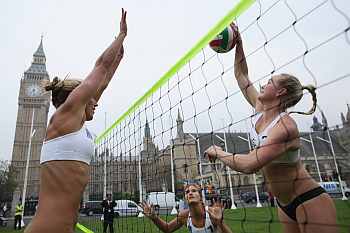 The line of questioning was in character for the Sun, a newspaper that publishes a photograph of a bare-breasted young woman on its page three every day of the week.

Others, however, were equally interested in the subject of bikinis, which dominated the news conference.

The men's pair sat unnoticed while almost all the questions were directed at the women. At the end, a crowd of photographers surrounded the women while the men were ignored.

Adopting a different approach but still sticking to the subject, a woman reporter from the Daily Mail newspaper asked Dampney and her team mate, Shauna Mullin, whether they sometimes got irritated about the relentless focus on their outfits.

"It's not something to fight about," said Dampney, adding that she hoped that people who were drawn by the promise of toned and tanned female bodies in skimpy swimsuits would develop an interest in the sport itself.

Changing perceptions of beach volleyball will not be easy. It has been a fully fledged Olympic sport since Atlanta in 1996 but still struggles to be taken seriously.

A widespread tendency to treat the sport as an opportunity for sexually charged attempts at humour was exemplified by a press release from the airline Virgin Atlantic this week.

"Virgin Atlantic has come to the rescue of red-blooded males across the UK by offering to provide banks of patio heaters around the courts...so that competing beauties will continue to wear bikini bottoms," it said.

A Virgin spokeswoman said on Thursday the airline had made the offer of patio heaters to the organisers of the London Games in all seriousness. It had not received a response.

© Copyright 2020 Reuters Limited. All rights reserved. Republication or redistribution of Reuters content, including by framing or similar means, is expressly prohibited without the prior written consent of Reuters. Reuters shall not be liable for any errors or delays in the content, or for any actions taken in reliance thereon.
Related News: Zara Dampney, Sun, Virgin Atlantic, Shauna Mullin, Daily Mail
SHARE THIS STORYCOMMENT
Print this article 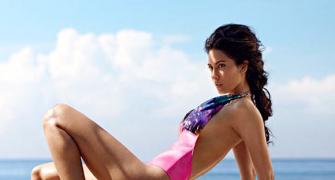 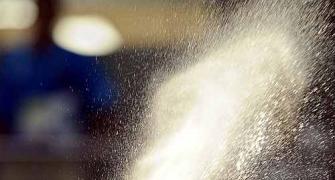 PHOTOS: Mona Lisa's skeleton may have been found