India suffered a 0-3 defeat at the hands of world champions Australia to start their campaign on a losing note at the four-nation hockey test event for the upcoming London Olympics in London, on Wednesday.

Overall, the Indians played attacking hockey against the world champions but what put paid to their hopes was a weak defence.

If not for a brilliant performance by goalkeeper P R Sreejesh, the margin of defeat could have been higher as the Indian custodian made as many as six saves under the goal.

Australia were by far the dominant side on display and it showed in their game when they surged ahead in the 23rd minute through a field goal from Ford. 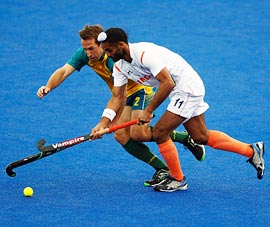 That was what both the sides managed in the first half as Australia went into the breather with a 1-0 lead.

After the change of ends, it took Australia just seven minutes to double the scoreline when Ghodes scored through another field goal.

If that was not enough, the Australians took the game away from the reach of India when Luke Doerner scored from a penalty stroke to make the scoreline 3-0.

India will play Great Britain on Thursday in their second match of the tournament at the pink and blue turf of the River Bank Arena, the main venue for hockey in the London Olympics.

Image: Australia's Liam de Young is tackled by Sarvanjit Singh of India during the men's preliminary match between Australia and India at the Riverbank Arena - Hockey Centre in London.