The World Badminton Federation charged eight female players with misconduct on Wednesday after four Olympic doubles teams had attempted to 'throw' matches to secure a more favourable draw later in the tournament.

"The pairs have been charged ... with 'not using one's best efforts to win a match' and 'conducting oneself in a manner that is clearly abusive or detrimental to the sport'," the federation said in a statement. 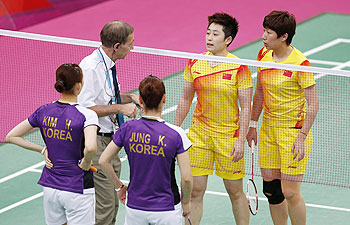 Spectators at the Wembley Arena shouted abuse and jeered at the players amid farcical scenes as the teams deliberately sprayed shots and duffed serves into the net to concede points.

"After the delegation's leadership learnt about it, they immediately tasked the relevant people with an investigation. The Chinese Olympic Committee has always advocated the fostering of the Olympic spirit on the playing field as well as the spirit of fair and just competition.

China "opposes any behaviour or acts which contravene this spirit or sports morality for any reason or in any form", the report added.

South Korea head coach Sung Han-kook said his two pairings attempted to throw their matches against China's world champion duo and the Indonesians but added it was in retaliation against the Chinese team who instigated the situation.

He said the Chinese deliberately tried to throw the first of the tainted matches to ensure their leading duo of Yu and Wang would not meet the country's number two pair until the gold medal decider.

"The Chinese started this. They did it first," Sung told reporters through an interpreter. "It's a complicated thing with the draws. They didn't want to meet each other in the semi-final.

"So we did the same. We didn't want to play the South Korean team again (in the knockout stages)."

Yu and Wang ended up losing to Jung and Kim 21-14, 21-11 after a referee warned both teams they could be disqualified. The first game's longest rally contained four shots.

Players were jeered as they left the arena, the result putting Yu and Wang on the other side of the draw to their compatriots.

China's long-serving head coach Li Yongbo denied anything was amiss when cornered at the venue.

"This is nothing. It was just a game," said Li with a chuckle as he walked off, declining to comment further.

Yu, who won doubles gold at the 2008 Beijing Games with partner Du Jing, said she and Wang eased off to conserve their strength for the later stages.

Boos again rang out later in the evening session as the match between South Koreans Ha and Kim and Indonesians Polii and Jauhari repeated the same farcical scenario.

With spectators yelling "get off", another referee emerged and waved a black card, indicating both teams were disqualified, prompting a roar of approval from the stands.

However, the referee rescinded the decision moments later after coaches from both teams implored the contest be allowed to continue and Ha and Kim ended up as reluctant winners in three sets.

Players and coaches of other teams expressed disdain and laid the blame on the Chinese camp.

"It's because of those Chinese," a Taiwan team coach who declined to be identified told Reuters.

"They did so many times last year, they did not play between each other like 20 matches. They do what they want," he said.

"England finished top of the group and had to play a stronger team."

China's head coach Li told one of his women's singles players to throw her semi-final at the 2004 Athens Games to allow team mate Zhang Ning to be fresher for the final against Dutchwoman Mia Audina.

"If it was the case they wanted to purposely lose, then it's a big shame ... it's absolutely stupid and shameful sport," Zwieber added.

"I can understand the motives but that they have the guts to actually stand in a crowded hall and put such shame in the game, it's such a bad image for badminton."

Organisers released the draw later on Tuesday, with all of the teams involved listed in the quarter-finals.

The incidents generated heated debate in China on Wednesday with many taking to the popular microblogging site Sina Weibo to slam their players.

"They should be thrown out of the Olympics," wrote one user.

However, some said they should be applauded for their cunning in trying to ensure golds for China.

"The competition is not just about athletic prowess. It's also about whether you can use your wits," wrote another user.

Image: Tournament referee Torsten Berg (2nd L) speaks to players from China and South Korea during their women's doubles group play stage Group A badminton match during the London 2012 Olympic Games at the Wembley Arena on Tuesday. Tournament officials are investigating a women's badminton doubles match between China and South Korea at the London Games on Tuesday after both teams appeared determined to lose

© Copyright 2021 Reuters Limited. All rights reserved. Republication or redistribution of Reuters content, including by framing or similar means, is expressly prohibited without the prior written consent of Reuters. Reuters shall not be liable for any errors or delays in the content, or for any actions taken in reliance thereon.
Related News: Wang Xiaoli, China, Kim Ha-na, Wembley Arena, South Korea
SHARE THIS STORYCOMMENT
Print this article
Singapore Open: Jwala-Diju in last eight 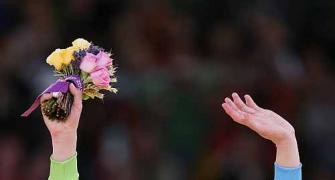 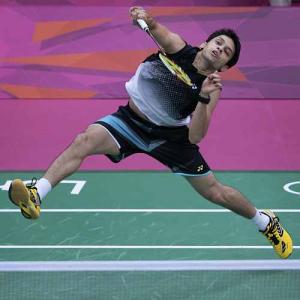