Earlier, two goals from Alvaro Negredo and a late strike from Alexis scrambled a 3-3 draw for holders Sevilla at Villarreal. 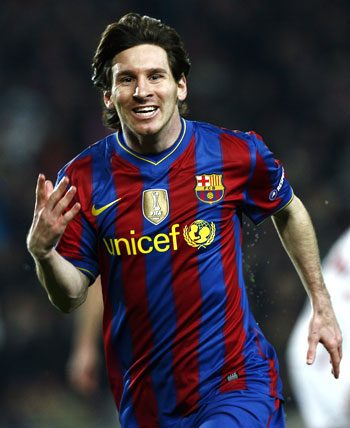 Messi paraded the FIFA Ballon d'Or trophy on the pitch at the Nou Camp before kickoff, flanked by team mates Andres Iniesta and Xavi who came in second and third respectively, and then took apart a valiant Betis.

The Argentine scored the first just before halftime, dinking the ball over the goalkeeper from an Iniesta pass, showed persistence to score the second in the 62nd, and claimed his hat-trick with a breakaway goal 11 minutes later.

Pedro and Seydou Keita wrapped up the scoring to leave the second division leaders with a mountain to climb in the next week's second leg.

At the Madrigal, Sevilla defender Alexis swept a low shot inside the far post in the 88th minute, after a clever stepover from Frederic Kanoute, to complete a comeback that had looked far from likely earlier on.

Villarreal have played some of the best football in La Liga this season and deservedly took a two-goal lead with a volley from Cani and a deflected Giuseppe Rossi shot after a corner.

Negredo muscled his way past a defender to pull one back against the run of play in the 39th minute and, after Marco Ruben had nodded Villarreal 3-1 up early in the second half, he struck again with a back-post header on the hour mark.