India legend Bhutia on how to be a top football striker

'It's all about that sixth sense. You need to smell it as to where it would be coming. The best strikers in the world all have that sense.' 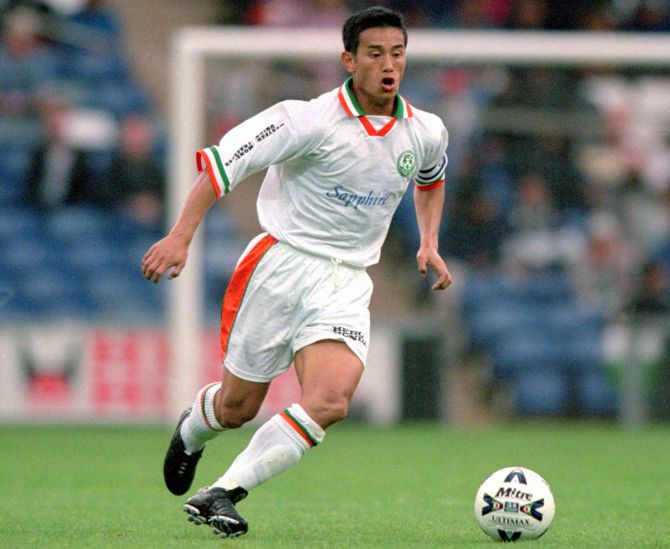 IMAGE: Bhaichung Bhutia, the first Indian footballer to have played 100 international matches, said strikers can be successful only when they can read goal-scoring situations well. Photograph: Shaun Botterill/Allsport/Reuters

Legendary Indian footballer Bhaichung Bhutia says all strikers need to develop "sixth sense to smell" the opportune time to strike if they are to score regularly.

In a chat with AIFF TV, Bhutia, the first Indian footballer to have played 100 international matches, said strikers can be successful only when they can read goal-scoring situations well.

"It's all about that sixth sense. You need to smell it as to where it would be coming. The best strikers in the world all have that sense," said Bhutia, who is known as 'Sikkimese Sniper' for his striking prowess during his playing days.

"You need to read situations. Unless you don't develop your sixth sense, you won't be a successful striker," said the 43-year-old former captain, who retired in 2011 after scoring 40 goals from 104 international matches.

Referring to current captain Sunil Chhetri's comments that 'scoring goals was all about life and death for Bhaichung-bhai', Bhutia stressed on the importance of "making those runs every time you sense it".

"Those runs are extremely critical for a striker. I used to keep telling Sunil that you need to anticipate and make runs from where you can score. If you go wide, you have to dribble and get past the defender, and by the time you turn and get past him, others will also rush in to block you," he said.

"Only once or twice out of maybe 10 situations you will get the chance to score. But you need to keep on doing it."

Bhutia said top strikers will need "to develop technically and mentally" because they get only a fraction of a second to put the ball past the goalkeeper into the net.

"Very often strikers come to me to ask what we can do when we don't get goals. I only tell them no matter what, you should not stop from making those runs. If you don't score first nine times and then give up, you'll not even be near to the ball in the 10th.

"If you look at Ronaldo and Messi, it's not always that they dribble past 3-4 defenders. Rather, all big strikers wait for the ball and then touch it. At the end, it's all about developing that sense and unless you keep on making those runs you will never develop that sense.'

Bhutia made mention of former India coach Rustam Akramov shifting him from a midfielder to a striker.

"I was an attacking midfielder and was used to make those runs from behind to get into the box and set myself in a position from where I could score. Those days we weren't much tactically equipped. Not many people would teach you in which position you should play. It was all natural, that's how I played," he said.