'People made fun of me for my disability. They told me I shouldn't be playing.' 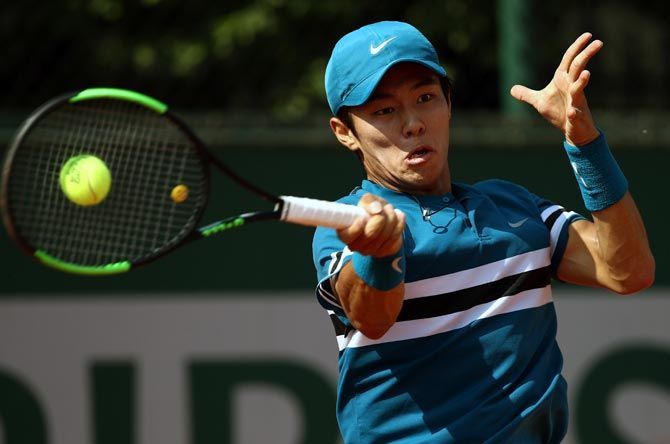 IMAGE: Lee Duck-hee cannot hear calls from the line judges or the umpire and relies on signals and gestures for the information. Photograph: Cameron Spencer/Getty Images

Lee Duck-hee became the first deaf player to win an ATP Tour main draw match on Monday when the South Korean defeated Henri Laaksonen 7-6(4) 6-1 in the first round of the Winston-Salem Open.

The 21-year-old fired nine aces on the way to claiming the win after a lengthy rain delay on the hardcourts in North Carolina.

Diagnosed as deaf at the age of two, Lee cannot hear calls from the line judges or the umpire and relies on signals and gestures for the information.

"People made fun of me for my disability. They told me I shouldn't be playing," Lee said after the match. IMAGE: Lee Duck-hee will take on third seed Hubert Hurkacz of Poland in the second round on Tuesday. Photograph: Cameron Spencer/Getty Images

"It was definitely difficult, but my friends and family helped me get through. I wanted to show everyone that I could do this.

"My message for people who are hearing impaired is to not be discouraged. If you try hard, you can do anything."

Next up for Lee is a second-round meeting with third seed Hubert Hurkacz of Poland on Tuesday. IMAGE: Andy Murray was beaten in the first round by Tennys Sandgren. Photograph: Rob Carr/Getty Images

Former world number one Andy Murray, continuing his comeback from hip surgery, fell 7-6(8), 7-5 to Tennys Sandgren in a first round match that was delayed by rain for several hours.

Murray battled hard to save three set points in the tiebreak before Sandgren converted the fourth to end the 74-minute first set when the Briton's volley found the net.

Murray was broken in the opening game of the second set and fell 3-0 behind before breaking back to leave the set poised at 5-5.

But the 28-year-old American broke back and then served out the match to set up a second round clash with Canadian second seed Denis Shapovalov.