Hundreds of police with helmets and plastic shields ringed the pitch and forced fans back in the post-match melee at St Andrews.

"That sours it a bit for us," Birmingham manager Alex McLeish told Sky Sports Television.

"It doesn't look good when you see the fans running on like that and some of the carrying on and interaction between the terraces and the pitch. It takes us back to the Dark Ages." 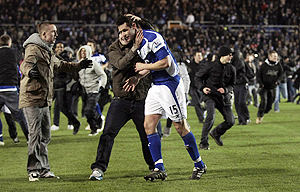 Television images showed fans ripping up and throwing seats in the stands while others lobbed flares into groups of spectators.

McLeish said he was worried about possible sanctions but played down fears that the violence could have a negative effect on England's bid to host the 2018 World Cup. The decision will be announced by the world governing body FIFA in Zurich on Thursday.

"I don't think that will affect the World Cup bid, I'm sure that has already been decided," he said.

Ipswich will play favourites Arsenal in the semi-finals while Birmingham City take on struggling West Ham United, who thrashed holders Manchester United 4-0 at a snowy Upton Park on Tuesday.

That match will pit Birmingham against their former owners David Sullivan and David Gold, who took over West Ham in January.

The match at St Andrews was heading for extra time until Birmingham's Serbian striker Nikola Zigic latched on to a low cross to grab the 84th-minute winner against last year's beaten finalists.

Birmingham had taken the lead against the run of play with a 12th-minute penalty after Lee Bowyer was bundled to the ground by Richard Dunne.

Sebastian Larsson slotted home from the spot but his strike was cancelled out in the 30th by Gabriel Agbonlahor, returning from illness, moments after a strike by Zigic was ruled offside.

The defeat was a bitter blow to Villa's French manager Gerard Houllier, who won the cup twice as Liverpool coach.

A 69th-minute penalty by Grant Leadbitter was enough to send Ipswich, reeling from four straight league defeats including a 4-1 loss to local rivals Norwich, through at a cold and wet Portman Road.

"The performance was pretty good tonight, I have to say," Keane told BBC radio. "I thought we deserved it, we should have won the game by three or four."

The Irishman was less happy about the draw immediately afterwards, however.

"Obviously Arsenal are a top team and they will no doubt be delighted at getting ourselves, the only Championship team left," he said. "It will be a great education for our players."