Pro Football Hall of Famer Lawrence Taylor pleaded guilty to misdemeanor charges he paid an underage girl for sex and must register as a sex offender, prosecutors said on Thursday.

The former linebacker for the NFL's New York Giants was expected to avoid jail time as part of a plea bargain in which he cooperated with state and prosecutors in their ongoing probe into sex trafficking in the New York area.

Taylor, 51, was arrested following the May 6 incident at the Holiday Inn in Montebello, some 35 miles (56 km) northwest of New York City. He previously faced felony charges in Rockland County Court. 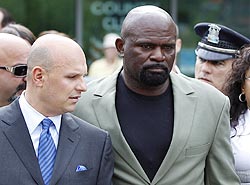 Taylor was expected to be sentenced on March 22 to six years probation with sex offender conditions, the Rockland County District Attorney said in a statement. He also must pay a $2,000 fine.

Among the previous felony charges handed down by a Rockland County grand jury was one count of third-degree rape, which carries a maximum sentence of four years in state prison.

"Behind the celebrity, this case is really about the indifference shown by this defendant toward a troubled, young woman forced into a life a prostitution," District Attorney Thomas Zugibe said in the statement.

The girl, a runaway, told police her pimp had verbally threatened her and physically assaulted her before bringing her to the hotel.

Taylor's combination of size, strength and speed made him one of the most dominant defensive players in the NFL and he helped the Giants win two Super Bowl titles. He was named most valuable player of the National Football League in 1986 and inducted into the Pro Football Hall of Fame in 1999.