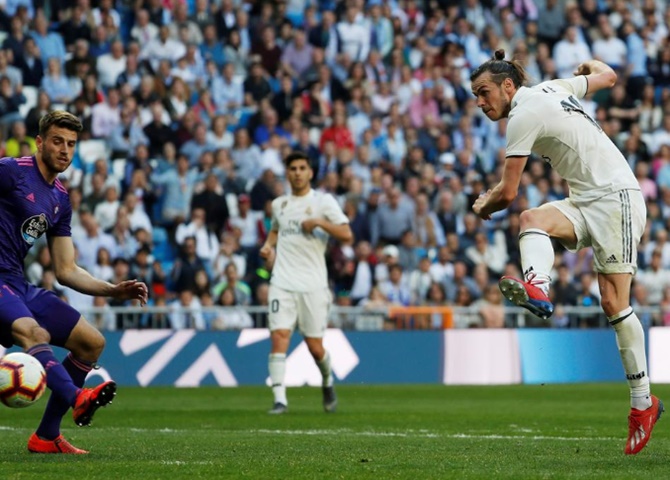 Zinedine Zidane's second spell as Real Madrid coach got off to a promising start with a 2-0 win at home to Celta Vigo in La Liga, on Saturday, thanks to goals from Isco and Gareth Bale, who had fallen out of favour with previous coach Santiago Solari.

Spain midfielder Isco was handed his first start in the league since October by returning hero Zidane and broke the deadlock in the 62nd minute by tapping in a low cross from Karim Benzema at close range.

Luka Modric had a goal ruled out for offside earlier in the second half and Bale, who had struck the crossbar in the first period, sealed victory with a shot in off the post in the 77th minute, further lifting the mood at the Santiago Bernabeu.

Real are third in the league standings with 54 points after 28 games, two behind second-placed Atletico Madrid who visit Athletic Bilbao later on Saturday and nine points behind leaders Barcelona who play at Real Betis on Sunday.

This was not quite as resounding a performance as the 5-0 win over Deportivo La Coruna in Zidane's first game as Real coach in 2016.

Yet it was still a therapeutic win for a team which had looked lost since the Frenchman announced his resignation after last year's Champions League final.

Zidane had said on his return that changes were needed at Madrid after haphazard results had seen Julen Lopetegui sacked in October, his replacement Solari dismissed and the team left with no trophies left to fight for this season.

The Frenchman's line-up showed he was serious as he brought back goalkeeper Keylor Navas, as well as Isco and Marcelo into the side, players who had all started in the Champions League final win over Liverpool but had been cast aside by Solari.

Navas was called into action early to palm away a goal-bound header from Maxi Gomez, but Madrid had the better of the first half and nearly took the lead when Bale smashed against the bar, while Sergio Ramos and Toni Kroos also came close.

Madrid looked to have gone ahead when Modric's shot bounced into the net, but the goal was ruled out after a pitchside Video Assistant Referee (VAR) review ruled Raphael Varane had been offside and obstructing Celta goalkeeper Ruben Blanco's view.

Isco soon brought a smile back to the Bernabeu faithful by guiding Benzema's cross into the net after an impressive run by Marco Asensio.

Much has been said about whether Zidane's return could mean the end of Bale's career in Madrid, but the Wales forward capped a strong display by sealing victory, making it three goals in his last two games under Zidane and further adding to the celebratory mood.