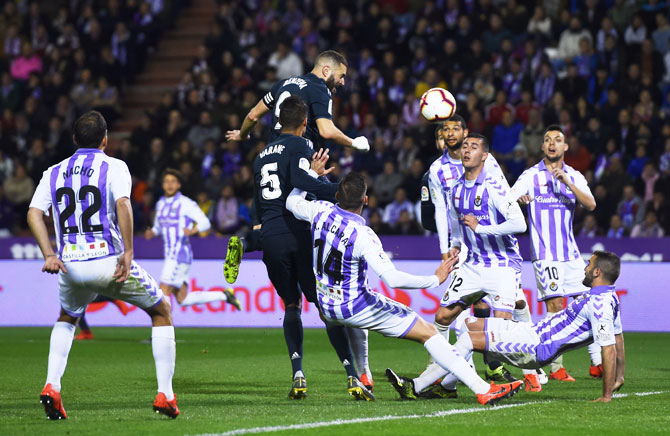 Real Madrid ended a three-game losing streak by winning 4-1 at Real Valladolid in a chaotic game on Sunday in which the hosts had two goals ruled out, missed a penalty and hit the woodwork while the visitors had Casemiro sent off late on.

Karim Benzema scored twice after the interval with a penalty and a header from a corner to give Santiago Solari's side a 3-1 lead, after Raphael Varane struck in the 34th minute to cancel out Anuar Tuhami's goal for Valladolid five minutes earlier.

Ballon d'Or winner Luka Modric then showed his class to stretch Madrid's lead in the 85th after Casemiro was dismissed for earning two bookings.

Modric's goal completed a highly entertaining and eventful match at the Jose Zorilla stadium, which experienced a power cut before kick off, although the game began on schedule.

The victory is unlikely to extend Argentine Solari's stay, with reports in Spanish media predicting he will be sacked on Monday having only taken the reins permanently in mid-November after succeeding Julen Lopetegui, who was sacked in October.

Madrid had endured one of their worst ever weeks before the game, exiting the Champions League in the last 16 with a 4-1 home defeat by Ajax Amsterdam after sustaining successive losses to Barcelona which ended their hopes of winning any silverware.

Sunday's win took Madrid to 49 points and they are 12 adrift of leaders Barca and five behind second-placed Atletico Madrid.

"It is an emotional game and it has been a difficult week, the opponent plays too and today they gave a lot of energy but my players delivered," Solari told reporters.

"We scored goals that would have been useful to use in previous games, but at least we scored them today. I have to credit the players for their professionalism and efforts."

However, Solari refused to say whether he had any indication if he would remain in the job. “I cannot answer that question. All I can focus on is tomorrow's training session," he added. 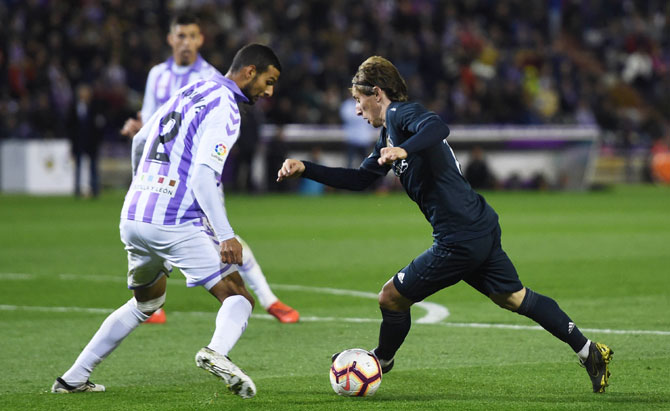 Solari's first game in charge of Real in La Liga was against Valladolid back in November and on that occasion his side also rode their luck, winning 2-0 with goals in the final 10 minutes after the visitors had hit the woodwork twice.

Real had a total of six players unavailable for this game including Gareth Bale, Vinicius Jr, Lucas Vazquez, Dani Carvajal and captain Sergio Ramos, but Solari still left Spain international Isco out of his matchday squad.

Valladolid made a determined start and were awarded a penalty when Oscar Plano's shirt was tugged by Alvaro Odriozola, but Ruben Alcaraz blazed over the bar from the spot -- the fifth penalty in a row his side have squandered this season.

Valladolid forward Sergi Guardiola then had two efforts ruled out for offside in the space of two minutes after Video Assistant Referee (VAR) reviews.

However, the striker played a big part in Valladolid finally taking the lead, sliding to meet a cross at the far post and rolling the ball towards Anuar who tapped in from close range.

Madrid levelled thanks to some sloppy goalkeeping from Valladolid's former Barcelona goalkeeper Jordi Masip, who lost an aerial contest with Nacho, and Varane calmly knocked the loose ball over the line into the net with his studs.

The goal killed Valladolid's momentum and while Madrid did not sparkle in the second half, their superior quality shone through with Benzema's double and Modric's classy finish.

"This victory does not make up for the week we have had, this club obliges you to win every game and we try to defend this badge every day," said Real defender Nacho.

"It's difficult because things are not going well for us, but Solari is our coach and we have to be behind him."

Valencia claimed a fourth straight win in all competitions to reignite their hopes of finishing in the Liga top four by winning 3-2 at Girona with a late goal from teenager Ferran Torres after having a man sent off on Sunday.

Forward Ferran, 19, latched on to a through ball and rounded goalkeeper Bono to score in the 90th minute and give Valencia the lead for the third time in a thrilling game at Montilivi.

The dramatic win left Valencia seventh on 39 points, six behind fourth-placed Getafe, two adrift of Alaves in fifth and one behind Sevilla, who thrashed Real Sociedad 5-2 on Sunday with the help of a hat-trick from Wissam Ben Yedder.

Portugal international Goncalo Guedes scored his first goal of the season to put Valencia ahead in the 14th with a smart first-time finish but Girona defender Jonas Ramalho headed the home side level midway through the first half.

Valencia captain Dani Parejo netted early in the second period but Girona's Uruguay international Cristhian Stuani equalised with a penalty in the 83rd after Facundo Roncaglia was sent off for two yellow cards in the space of 10 minutes.

Girona then sought a winner and left themselves open at the back, making it easier for Geoffrey Kondogbia to pierce their high defensive line with a pass which Ferran made the most of.

© Copyright 2020 Reuters Limited. All rights reserved. Republication or redistribution of Reuters content, including by framing or similar means, is expressly prohibited without the prior written consent of Reuters. Reuters shall not be liable for any errors or delays in the content, or for any actions taken in reliance thereon.
Related News: Real Valladolid CF, Santiago Solari, Valencia, Real Madrid, Girona
SHARE THIS STORYCOMMENT
Print this article 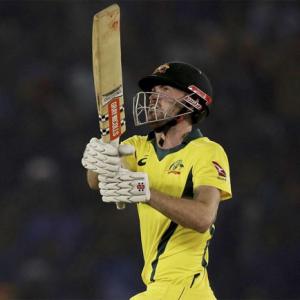