Ten-man Real Madrid slumped to a surprise 1-0 defeat at Levante on Sunday as the tiny Valencia-based club ended the nine-times European champions' perfect start to the season.

Jose Mourinho's side had midfielder Sami Khedira sent off five minutes before halftime and fell behind when Levante forward Arouna Kone, who joined from Sevilla in the close season, smashed the ball into the net with just over 20 minutes left. 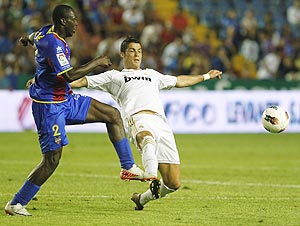 Real's Portuguese forward Cristiano Ronaldo, top-scorer in the league last season with a record 40 goals, started on the bench after he sustained a gashed ankle in the 1-0 Champions League win at Dinamo Zagreb in midweek.

Coach Mourinho brought his compatriot on at the break to replace the ineffective Karim Benzema but not even the former World Player of the Year could find an equaliser.

The result leaves Real on six points from three matches, one behind champions Barcelona, who romped to an 8-0 victory at Osasuna on Saturday with a devastating performance after a poor week by their high standards.

Pep Guardiola's side, bidding for a fourth straight domestic title, had been accused of complacency after blowing leads against Real Sociedad in La Liga and AC Milan in the Champions League to twice draw 2-2.

Valencia, who beat Sporting Gijon 1-0 away on Saturday, are top on a perfect nine points and ahead of promoted Real Betis on goal difference after the Seville-based outfit beat Marcelo Bielsa's Athletic Bilbao 3-2 in Sunday's late kickoff.

Both sides had a player sent off. Former Argentina and Chile coach Bielsa is still looking for a first win of the campaign after taking over at the Basque club in the close season.

Levante have an annual budget of around 20 million euros ($27.3 million), compared with Real's of just under 500 million, but the home side made a mockery of the huge gap in wealth with a stirring performance at their 25,000-capacity Ciutat de Valencia arena.

The club narrowly avoided relegation last season having won promotion to the top flight the previous campaign and held Real to a 0-0 draw in the same fixture just under a year ago.

German international Khedira was shown a second yellow card after getting caught up in a melee and shoving the home side's captain Sergio Ballesteros to the ground.

Mourinho, who joked before the game that Real's priority this season was to avoid relegation, laid the blame for the defeat squarely on Khedira's shoulders.

"The one responsible for the defeat is Khedira," the former Chelsea and Inter Milan manager said.

"I congratulate Levante, they are clever, they know how to provoke and that is also part of football," he added.

In the earlier kickoff, Atletico Madrid's new signing Radamel Falcao lit up the Calderon with a splendid hat-trick to set Gregorio Manzano's side on their way to a 4-0 win at home to Racing Santander.

The Colombian striker, top-scorer in last season's Europa League with 17 goals as he led Porto to the title, netted the opener in the 23rd minute at a sun-bathed stadium after good work by former Arsenal winger Jose Antonio Reyes.

His second came from the penalty spot in the 36th after Brazilian Diego, another close-season addition to the squad, had been felled in the box.

Atletico's third high-profile new signing, Turkey midfielder Arda Turan, then played Falcao through to complete his treble with a deft chip over Tono 10 minutes after the break.

Brought in to help fill the gap left by the departures of Diego Forlan and Sergio Aguero, it was the Colombian's first hat-trick in a domestic European league, although he netted three in last season's Europa League.

He was given a rousing ovation by the home fans when he was substituted midway through the second half.

Turan claimed his second assist with just over 10 minutes left when he crossed for substitute Adrian to glance a header past Tono for the home side's fourth to round off their first win of the campaign.

Real Zaragoza forward Luis Garcia had an eventful match against his former club Espanyol in Sunday's earlier kickoff, smashing in a stoppage-time winner for a 2-1 victory minutes after he seeing his penalty saved by Cristian Alvarez.

Garcia, who joined Zaragoza in the close season, put his new club ahead in the 29th minute before Javi Lopez equalised with 20 minutes left.

In Sunday's Madrid derby, promoted Rayo Vallecano claimed their first win of the campaign with a 1-0 success at Getafe.