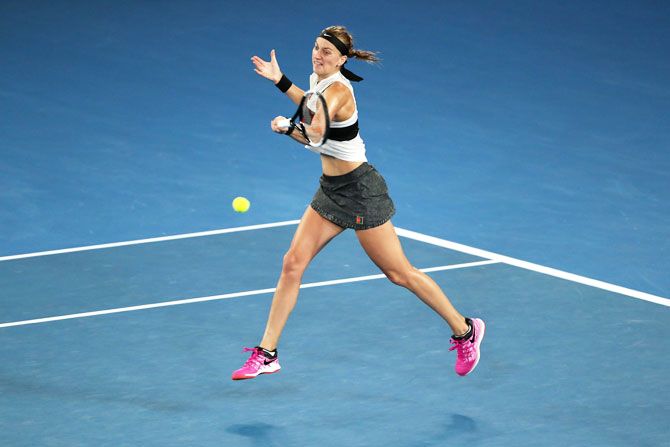 IMAGE: According to Vanek, Kvitova used to be too concerned about the opinion of other people since the 2016 incident but her focus was now back firmly on herself and her tennis again. Photograph: Lucy Nicholson/Reuters

Petra Kvitova needs to be in her own "bubble" to find her killer instinct, coach Jiri Vanek said on Friday ahead of the Czech's Australian Open final showdown against Naomi Osaka.

Kvitova was left a nervous wreck after being attacked by a knife-wielding home intruder in 2016 and would struggle to be in a room by herself.

She missed the 2017 tournament while recovering from surgery on the stab wound to her racket hand she suffered during the attack and exited MelbournePark after a first round loss to Andrea Petkovic last year.

But the 28-year-old Czech is now one match away from crowning one of the bravest comebacks in tennis after beating Danielle Collins 7-6(2) 6-0 to reach her first final at Melbourne Park this year.

Kvitova has appeared to be always smiling off the court belying the intensity she brings during her matches.

"She's always smiling. I mean, we try in our team to smile everywhere. We make so many funny stuff around the court. She likes it," Vanek, a former professional singles player, told reporters on Friday.

"I mean, sometimes she's, we call it if she's in her bubble that she plays this way. But sometimes happens, like, two, three months when she's not in the bubble then she plays in a different way.

"We just try to put her (back) to her bubble. Then she find her killer instincts."

According to Vanek, Kvitova used to be too concerned about the opinion of other people since the 2016 incident but her focus was now back firmly on herself and her tennis again.

"Somebody can come and say something not really nice, and so we keep her away from other people," added the 40-year-old, who has also worked with former world number one Czech Karolina Pliskova.

"We just stay together with her, with our fitness coach, and we just have our team and we don't need somebody else to be with us."

The tall left-hander has also looked at her fittest at MelbournePark which has also helped her improve her game.

"She lost some weight. She even tells us she feels more comfortable on the court when she's running, when she has longer rallies.

"During our preparation before the season, we tried to play as much tennis as we can and lose (weight), that probably helps her a lot."

Kvitova said there were a number of occasions when she thought she would never be able to make another Grand Slam final and counted last year's first round exit at Melbourne Park as one of her lowest moments since returning to playing.

"I think there were a few of them," the double Wimbledon champion said. "I think one of them was just last year when I lost to Petkovic in my first round here, which I felt really terrible. Of course losing in Wimbledon was hurting a lot, as well, at the time.

"I think those two losses were really tough for me. Was especially in the Grand Slams, of course. The feeling how I felt wasn't really nice. Sometimes I'm probably too stressed and it's not really great."