Kristina-Timea forced to withdraw due to COVID-19 restrictions 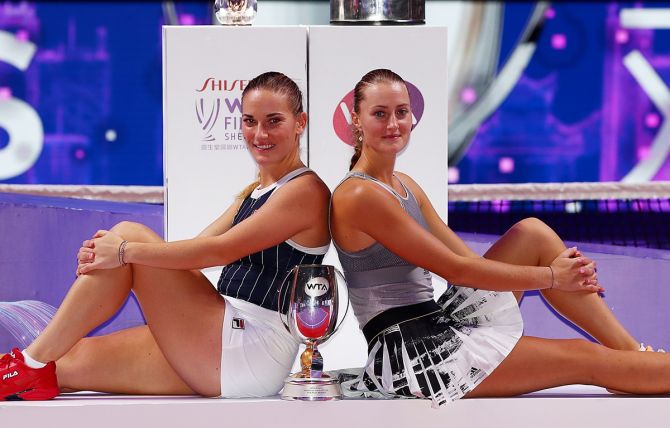 Doubles top seeds Kristina Mladenovic and Timea Babos were withdrawn from the US Open on Saturday, hours before they were due on court after Mladenovic received a COVID-19 quarantine notice from public health officials, the United States Tennis Association (USTA) said.

Mladenovic is one of 10 players who came in contact with France's Benoit Paire, who was pulled out from the men's field at the hardcourt major after testing positive for the new coronavirus.

Since the players are staying in Nassau County, which borders New York City, the USTA said public health officials prevented those who were in contact with Paire from travelling to Flushing Meadows where the Grand Slam is being held.

"Public health officials of Nassau County, N.Y., have issued quarantine notices for all individuals who had prolonged close contact to a person who previously tested positive for the COVID-19 coronavirus," the USTA said in a statement.

"All persons who were identified as having prolonged close contact with the infected player will quarantine in their rooms for the remainder of their quarantine period.

A USTA spokesman told Reuters the quarantine notice was issued on Friday evening and that the tournament was not expecting any other withdrawals.

Third seed Daniil Medvedev said he has been tested on a daily basis -- with all tests coming back negative -- even though he had no contact with Paire, suggesting he may have been in the same room as him.

"I actually had no contact with Benoit," the Russian said after he advanced to the fourth round. "I don't know how they check it, like how they trace it. I think it's by credential, and maybe I was in the same room with him."

"So after talking to USTA and a doctor from the New York department... they said, 'Okay, just do (a) test every day and you live normal'. If we can call this normal... It doesn't bother me at all."

Mladenovic had previously complained of living a "nightmare" due to the health protocols at the Grand Slam after suffering a spectacular meltdown to lose to Russian Varvara Gracheva in her second-round singles match on Wednesday.

The 27-year-old was one of several athletes placed under an "enhanced protocol plan".

She had complained saying she felt like she was being treated like a prisoner after she was placed inside a 'bubble within a bubble' despite 'thirty negative tests'.

France's Adrian Mannarino was also placed in the same protocol plan and his match with fifth seed Alexander Zverev was pushed back on Friday as the USTA engaged in discussions with health officials to allow the match to go ahead.

Mannarino was knocked out in four sets.